Even without a boost from El Niño, January 2017 was 3rd warmest such month in records dating back 137 years 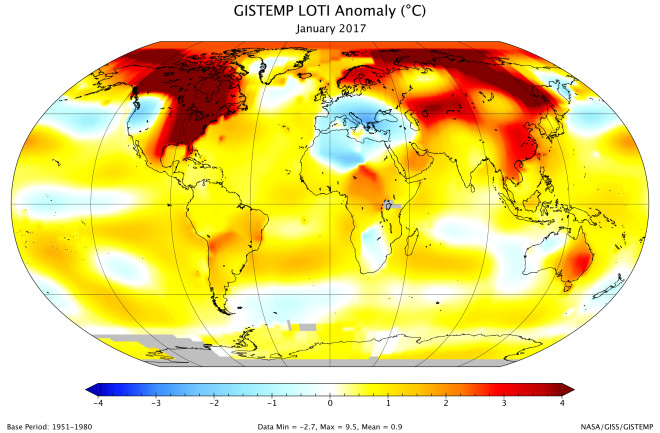 A map of temperature anomalies for January 2017 shows that most of North America and Siberia were much warmer than the 1951-1980 base period. Much of the rest of Asia was also relatively warm. (Source: NASA Goddard Institute for Space Studies) Unlike last year, January 2017 got no temperature boost from El Niño. Yet it was still remarkably warm. In their monthly analyses, both NASA and NOAA concur that this past month was the third warmest January since record keeping began in 1880. Last month's temperature was 0.20 degrees Celsius cooler than the warmest January on record, which occurred just last year, according to NASA. Even so, the agency reports that January 2017 was 0.92 degrees Celsius warmer than the mean temperature for the month during the base period of 1951-1980.

Source: NASA GISS It's tempting to breathe a little sigh of relief, since January 2017 seems to mark the first time in awhile that global temperatures did not continue a steady upward march, as measured by the 12-month running mean. (Click on the image at right to see what that looks like.) But I'm not breathing too deeply, since the dip is tiny — and January was still plenty warm, even thought the warm sea surface temperatures in the tropical Pacific characteristic of El Niño dissipated many months ago. The top two warmest January's were 2016 in first position, and 2007 in second; both occurred in El Niño years. Surface temperatures across most of the ocean surfaces were well above average, making January 2017 the second warmest for the seas, according to the NOAA report. A mild and short-lived cool La Niña episode developed after 2016's monster El Niño. But it's gone now. With no La Niña cooling influence on the horizon, it will be interesting to see what will happen to global temperatures during the rest of the year.