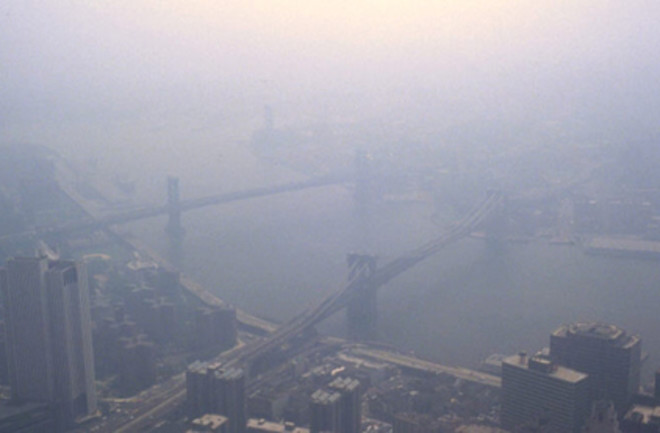 Are we finally going to clean the skies of smog-causing nitrogen oxides and sulfur dioxide? The Environmental Protection Agency proposes new rules this week that would force power plants in 31 states, mostly in the East, to cut emissions of both to more than half of their 2005 levels by 2014.

The new rules take advantage of the "good neighbor" provision of the Clear Air Act to cut interstate transport—not cars and trucks, but the drift of air pollutants across state borders. (Air pollution, not unlike oil spills, does not respect the lines of the map) [TIME].

The Bush Administration tried to adopt a similar rule, but two years ago a U.S. Court of Appeals said the EPA had overstepped its bounds and nixed the regulations.

As a result, many power companies scaled back their investments in pollution controls. Now those companies will have to decide whether it is more cost-effective to retrofit their dirtiest power plants or shut them down [Los Angeles Times].

The EPA trumpeted its new rules, which would take effect in 2012, by boasting about the positive health effects. While the rules would cost industry nearly $3 billion to execute, the EPA says, they would save $120 billion or more by preventing illnesses like bronchitis and asthma, and seeing fewer work days lost to sickness. (We should note here that these numbers, which sound good in a press release, are very rough estimations. We've been hard in the past on people who try to estimate the money or hours lost in the U.S. economy when the NCAA basketball tournament or the World Cup airs. However, the health benefit of better air quality

, especially on stinking hot days like today, is no joke.) There EPA regulations might have more staying power than those Bush tried to enact. But the future of regulating coal plants lies in Congress.

Some analysts said the proposed rules could push utilities to support a plan for climate legislation that would cap greenhouse gas emissions at power utilities first. Utilities may seek to get relief from some air and water pollution controls from regulations in a climate bill in exchange for shutting down their least-efficient plants fired by coal, which emits more carbon dioxide than any other fossil fuel [Reuters].

DISCOVER: The Smoking Torch explains what smog does to an athlete’s lungs