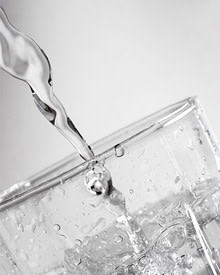 Up to 16.6 million people in the United States may be drinking water laced with a chemical found in rocket propellants and fireworks. It's called perchlorate, and although the Bush administration decided against regulating it, the Obama administration's EPA has reversed course and announced plans to set a limit for the amount of perchlorate drinking water can contain.

Research by the Food and Drug Administration, among others, found perchlorate contamination in food and water in 45 states, and a small study in the Boston area found perchlorate in the breast milk of nursing mothers. [Los Angeles Times]

While the chemical is found nationwide, it's particularly a problem in California, near the state's old manufacturing sites and military bases. Before companies wised up, it used to be common practice to dump perchlorate into unlined pits which--surprise!--leads to the chemical seeping into groundwater. This water eventually finds its way into many places, including public drinking water supplies and irrigation systems.

Because that water irrigates crops and rangeland, perchlorate also taints a variety of foods. A U.S. Food and Drug Administration study of raw and prepared foods in 2006 found elevated perchlorate levels in everything from ice cream and chocolate bars to raisins and spinach.... Its presence in baby cereal and formula -- and breast milk -- is particularly worrisome given perchlorate's impacts on the thyroid gland. Chronic exposure to perchlorate can dampen the thyroid's ability to absorb iodide and produce hormones. That, in turn, can disrupt metabolic functions in adults and impede physical and mental development in unborn children and infants. [San Francisco Chronicle]

Many politicians (especially Democrats) are celebrating the EPA's decision as an environmental victory.

"I applaud EPA's decision to regulate perchlorate in drinking water," Sen. Dianne Feinstein, D-Calif., said in a statement. "Americans simply shouldn't have to worry that the water they drink and cook with will make them sick." [San Francisco Chronicle]

As for less enthusiastic reactions, these range from slight ambivalence to harsh disapproval:

[The] Perchlorate Information Bureau (PIB) said "despite 50 years of scientific research that indicate the low levels of perchlorate being detected in the environment have no effect on human health, much is already being done – even in the absence of a regulatory standard – to further ensure public health is protected." [International Business Times]

The "EPA has changed its position," one senior Republican Senate staffer said. "That's not good policy. Nothing new is being presented as far as the science goes." [Los Angeles Times]

Although the EPA has declared its intention to regulate perchlorate, it will still take several years of scientific review and public comment before a limit is set--which should give water companies time to put new filtration systems in place. The agency also began the process of setting standards for 16 other chemicals that can reach water supplies and pose a threat to human health. Related Content: 80beats: Is Natural Gas Drilling to Blame for Wyoming Town’s Undrinkable Water? 80beats: Study: Canada’s Oil Sands Mining Sends Toxins Into Rivers 80beats: EPA's New Air Pollution Rules Crack Down on the Dirtiest Power Plants Discoblog: Potty Trained Piggies Help Keep Taiwanese Rivers Clean DISCOVER: 20 Things You Didn't Know About... Water