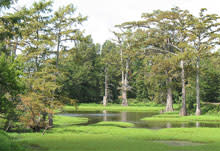 The Environmental Protection Agency has vetoed a massive flood control project that was in the works for seven decades.

The move – which puts the kibosh on the proposed Yazoo Pumps Project to reduce flooding between the Mississippi and Yazoo rivers – is only the 12th time the Environmental Protection Agency has used its authority to scrap a project under the Clean Water Act [Scientific American].

The EPA's decision is being hailed as an environmental victory, as the plan called for massive pumps that would have drained water out of at least 67,000 acres of wetlands, irrevocably altering the ecosystem. The landscape of swamps, bayous, and cypress trees is vital to an extensive range of wildlife, including fish, migrating birds, and the endangered Louisiana black bear; the wetlands are valued not only by conservationists, but also by hunters and commercial fishermen. Some observers characterized the Yazoo project, which was first authorized by the U.S. Army Corps of Engineers in 1941, as a relic of a time when the importance of the wetlands wasn't understood.

Ben Grumbles, the EPA's assistant administrator for water, described the undertaking as a "dinosaur of a project...designed more to protect agriculture than people and their homes" [The Wall Street Journal].

The Army Corps' century-long policy of taming the Mississippi River and its delta with flood-control projects has been blamed for the loss of wetlands along the Gulf Coast, and therefore the loss of a buffer against the storm surge kicked up by hurricanes. Despite the EPA's veto of the $220 million Yazoo project, the debate is likely to continue.

Peter Nimrod, chief engineer for the Mississippi Levee Board, said project supporters are left "confused" and "aggravated" by the decision. The board could consider filing or joining a lawsuit against the EPA to stop the veto. "It's hilarious that they keep saying they believe there's a better way to provide flood control that will be less environmentally damaging when they have no idea what it will be," Nimrod said [Hattiesburg American].

Planet Earth#BlackInNature: How Young Scientists are Pushing for Equality
Recommendations From Our Store