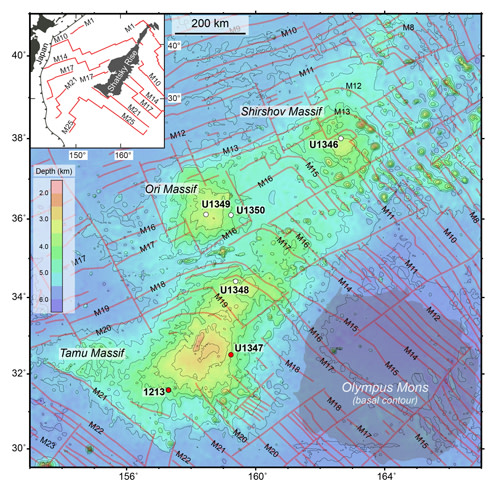 Bathymetry of Shatsky Rise showing the world's largest volcano, Tamu Massif, at its southern end. A shadow basal contour of Mars' Olympus Mons appears in the lower right corner of the image for comparison. Image credit: Willam Sager, University of Houston. There's big and then there's big. And then there's Tamu Massif. A single enormous volcano under the northwestern Pacific Ocean has been found to be the largest on Earth and a rival in size to Mars' Olympus Mons, the biggest known volcano in the solar system, according to findings published today in Nature Geoscience. Tamu Massif, the oldest seamount in a formation known as the Shatsky Rise, is about the size of the British Isles. Researchers used seismic profiles and core samples to determine that Tamu Massif, rising from the ocean floor between Japan and Hawaii, is a massive basaltic shield volcano. The seamount formed about 145 million years ago at the south end of Shatsky Rise, an oceanic plateau itself about the size of California. Core samples revealed massive lava flows up to 75 feet thick on Tamu's slopes. The lava sheets had a high flow rate and low viscosity, creating the signature broad dome shape of a shield volcano (in contrast, most seamounts form through eruptions of lava with a low flow rate, which creates steeper slopes). The team also obtained seismic profiles by bouncing signals through the igneous crust to determine its depth and spread. Based on the distribution of the lava, researchers were able to determine that Tamu built up from huge eruptions at a single summit. Tamu Massif is larger than the multi-volcano complexes on the islands of Hawaii and Iceland. The oceanic plateaus of Ontong Java and Kerguelen are larger, but both are considered composite complexes with multiple volcanoes. Tamu's Martian brethren, Olympus Mons, may seem more impressive because it rises nearly 14 miles above the Red Planet's surface. Tamu Massif's summit, by contrast, is just over two miles from the sea floor. "But their volumes are comparable," notes William Sager of the University of Houston, the study's lead author. "Tamu is only about 25% smaller in volume. Tamu is like an iceberg. It is 30 km (more than 18 miles) thick with most of the bulk in the mantle, whereas Olympus formed on thick lithosphere, which supports its height." Future research on Tamu Massif will explore how such a large volume of magma formed beneath the single volcano before erupting.