Emperor Penguins May Be Marching to Extinction by 2100 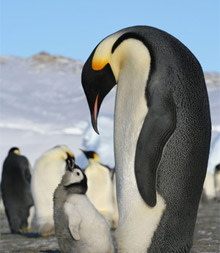 The predicted loss of sea ice around Antarctica over the next century may doom one of the celebrities of the animal world to extinction.

Emperor penguins, the species of these aquatic flightless birds featured in the Oscar-winning 2005 documentary "March of the Penguins," breed on Antarctic sea ice and dive from the sea ice to feed on krill, fish and squid [Reuters].

In a new study, researchers examined the Intergovernmental Panel on Climate Change's (IPCC) projections on how global warming will alter sea ice coverage around Antarctica, and say the models don't auger well for the emperor penguins. The researchers combined ten different climate projections with

a "population dynamics" model describing the mating patterns and breeding success of emperor penguins. The model has been honed using 43 years' worth of observations of an emperor colony in Antarctica's Terre Adelie.... They then ran 1,000 simulations of penguin population growth or decline under each of those 10 climate scenarios [BBC News].

The results predicted that the 6,000 breeding pairs in Terre Adelie could be reduced to 400 pairs by 2100. Researchers say this 95 percent decline qualifies as a "quasi-extinction," as the colony's tiny remaining population would be vulnerable to diseases and genetic defects. They also say that the possible demise of the Terre Adelie colony could indicate the fate of the entire species (about 200,000 breeding pairs currently live in 40 colonies around Antarctica). The models showed a 40 percent chance that the Terre Adelie colony would decline to quasi-extinction status by the end of the century, researchers wrote in the Proceedings of the National Academy of Sciences [subscription required]. Study coauthor Hal Caswell says those

odds aren't good. "If I offered you an investment with a 40% chance of losing 95% of your money, would you take it?" he says [New Scientist].

To avoid extinction, the penguins would have to adapt to the shrinking ice by either migrating to new territory or changing their breeding patterns, arriving on the ice and laying their eggs earlier in the season.

Unfortunately, Emperor Penguins are known for being slow to change. “The penguin is long-lived, and climate change is happening very quickly, so there will be significant impact on the population before many generations have passed,” says [study coauthor] Hal Caswell.... "Thus it will be difficult for adaptation, even if possible, to happen fast enough” [Popular Science].

Related Content: 80beats: Emperor Left Out in the Cold as Other Penguins Get U.S. Protection 80beats: Antarctica Is Definitely Feeling the Heat From Global Warming 80beats: 2 Trillion Tons of Polar Ice Lost in 5 Years, and Melting Is Accelerating DISCOVER: Beacon Bird of Climate Change