Eco-Chic to the Rescue!

Sea leather, hemp, and bamboo make up this season's runway couture—but will it really help the planet? 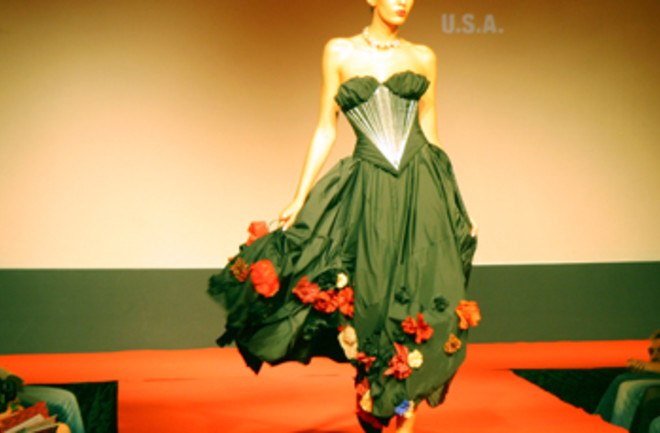 Rainer Wolter's award-winning gown features a bustier boned with abandoned -umbrella spines and a skirt adorned with reused brolly flowers. Even the necklace is made of tossed umbrella hardware. | Rainer Wolter

On September 7 the environmental organization Earth Pledge plans a reprise of its highly acclaimed Future­Fashion, a runway event in which top designers such as Stella McCartney, Calvin Klein, and Donatella Versace experiment with earth-friendly fabrics. “Not only was it exciting to use eco-friendly materials like hemp and cotton for an Atelier evening gown,” says Donatella Versace, whose dress was featured in Future­Fashion earlier this year, “but also, it is about time all of us do whatever we can to go more green.”

Trendy greenies can now dress in a variety of eco-textiles, such as “sea leather” made from the discarded skins of nonendangered fish; weedlike hemp, which requires little fertilizer; bamboo, which needs no tending and whose extensive roots can prevent soil erosion; Ingeo, a fiber fermented from corn; or hardy nettles, which can grow in various habitats, including soil that has been overfertilized. The eco-aware can also buy organic cotton grown without chemical fertilizers or pesticides, and cashmere derived from goats raised in sustainable herds (rather than from the Inner Mongolian goats whose grazing has severely eroded the sensitive Ordos Plateau). Designer Linda Loudermilk—a pioneer in environmental fashion whose collection is available at a wide range of boutiques—says she uses eco-friendly fabrics exclusively and adds to the list such exotic sustainable fibers as sea cell (a seaweed-based fiber), soy fiber* (extracted from the residue of soybeans used in the manufacture of tofu), and sasawashi (a linenlike blend of Japanese paper and kumazasa herb with anti­bacterial properties that “can heal a cut on your leg”—or so Loudermilk claims).

Recycling fiends, meanwhile, will be glad to know that abandoned umbrellas can find new life in couture gowns. Old skateboards and race-car tires are becoming new sandals. Bags are now woven from seat belts or stitched together from bicycle inner tubes, and bauble lovers can find all kinds of “trashion” jewelry and accessories made by hand from rubbish.

The big question is whether all this green trade truly does anything to protect the planet. Can you reduce your impact by buying more stuff? New eco-clothes are still new clothes, and the fashion industry’s insistence that one season’s cool togs are the next season’s trash spurs us to squander resources: Americans discarded 8,640,000 tons of clothing and footwear in 2006, according to Environmental Protection Agency estimates of municipal solid waste generation—a quantity that has more than doubled since 1990.

Another problem is the common misconception that natural is the same as ecologically sound. Marketing hype aside, just having leaves doesn’t make a fiber green. Cotton, for example—which has been “natural” for 5,000 years—is actually extremely polluting and resource-hungry, in part because of the way it is grown. Cultivating one pound of it takes an average of 1,000 gallons of water; by contrast, producing an equivalent amount of polyester requires little or no water.

Conventional cotton growing consumes 500 pounds of pesticide per square mile and requires up to a pound of oil per pound of cultivated cotton to fuel farm machinery and crop dusters. Estimates of the carbon footprint vary wildly, but Christopher Goodall, a businessman turned climate crusader who calculated the impact of everything from miniature refrigerators to vacation travel for his book How to Live a Low-Carbon Life (Earthscan, 2007), puts it at three pounds of CO2 per pound of cotton.

Judged by its carbon footprint, wool may be more benign: Sheep graze freely on unfertilized grass, although their digestion of vegetation produces methane, which is a potent greenhouse gas. And polyester (manufactured from petroleum) may have the smallest impact on climate, according to Goodall. “When you make a piece of plastic that lasts, in effect, forever, you are taking hydrocarbons and sequestering them in an essentially indestructible piece of textile,” he says.

The truth is, of course, that none of us needs to dress in high-fashion wear in order to be greener. Both fashionistas and the just plain broke have long been familiar with the notion of recycling clothes, rooting through the racks in musty thrift stores or finding free outfits at extravaganzas such as Swap-O-Rama-Rama, where the hip exchange cast-off glad rags. If consumers really want to be eco-friendly and trendy, organic fabrics are probably better than those that are pesticide-soaked. But the best option of all? Just shop at Goodwill.

Be Green, Be Grubby

Kate Fletcher, an ecological design consultant, made and wore the same shirt for six months without washing it. It has a vinyl front to repel spilled food, and cutouts in the armpits for extra ventilation.

Dirty laundry, is turns out, is as bad for the environment as manufacturing. According to a University of Cambridge report, as much as 65 percent of the energy consumed in the life cycle of a cotton T-shirt is eaten up in washing, tumble-drying, and ironing. So you can reduce environmental wear and tear by wearing items that can take a beating: Tennis ball watches or old-typewriter bracelets, recycled rubber tire shoes and bags; but eco-trends are a flimsy substitute for real change.

* Correction: The article originally used the term "soy silk." SOYSILK® is a registered trademark of the South West Trading Company.