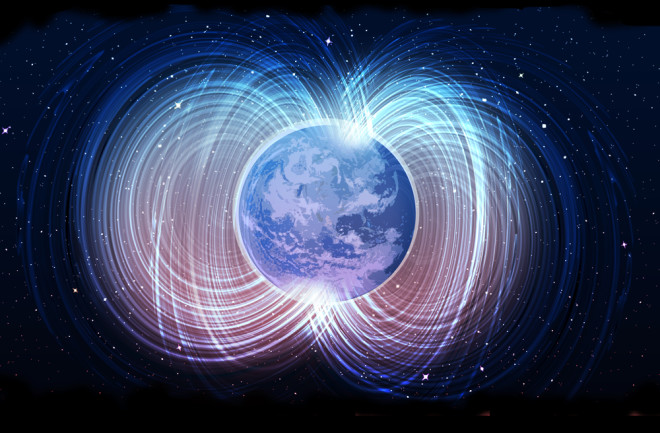 (Credit: Shutterstock) The Earth’s magnetic field has been declining about 5 percent every 100 years since at least 1840, and possibly even earlier. The dip in strength has spurred worries of an imminent "flip," a reversal of magnetic polarity that could be catastrophic to our modern technological networks. But a study released Monday in the Proceedings of the National Academy of Sciences brings some good news. A reversal is not likely in the near future, say European researchers, and the decrease in the field's strength is in line with similar variations in the past.

Look to the Past

The magnetic field is generated by the roiling core of molten metal that churns deep within the Earth, and it stretches far above our heads into outer space. But it's far from a static field — the movements of the core are complex and varying, and the field changes accordingly. Two of its most extreme changes are excursions and reversals. During both events, the strength of the field drops, making the magnetic poles rapidly flip. During an excursion, the poles return to their former positions, while reversals see them trade places. They’ve happened many times throughout history, which reflect changes happening within the Earth’s core. And reversals aren't good, to say the least. As Discover blogger Erik Klemetti points out, a reversal could mean higher levels of radiation, erosion of the ozone layer and disruptions to some organisms. Oh, and it would also disable pretty much everything that relies on electricity or satellites. Back to the study. A group of researchers from University of Iceland, University of Liverpool and among others analyzed the two most recent excursions: the Laschamp (41,000 years ago) and the Mono Lake (34,000 years ago). They found no similarities between the evolution of those excursions and the magnetic field's current state. However, about 49,000 and 46,000 years ago the state of magnetic field was comparable to today. Those didn't result in an excursion or reversal, so scientists believe that Earth's current field, while weakened, will recover similarly. And for those worried about the South Atlantic Anomaly, a particularly weak area of Earth's magnetic field stretching from South America to Africa, the researchers find no evidence that such areas are indicative of impending pole reversals. Put simply, based on historic trends it doesn't look like the magnetic field is headed for a " big flip." "Our research suggests instead that the current weakened field will recover without such an extreme event, and therefore is unlikely to reverse," said Richard Holme, professor of geomagnetism at the University of Liverpool, in a news release.