On the floor of the Pacific Ocean lies a giant that has been sleeping for 145 million years. 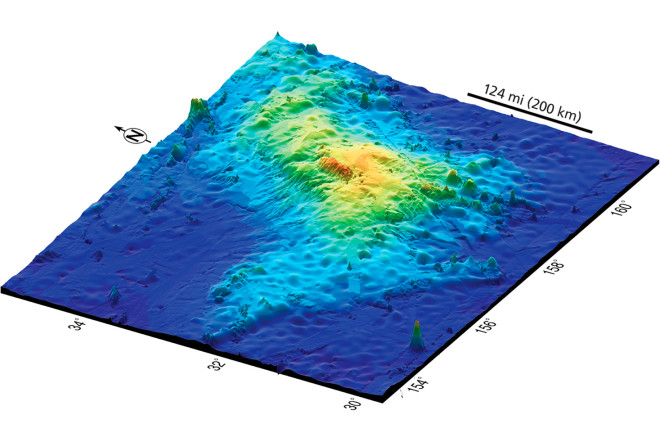 William Sager’s 20-year hunch has paid off in a very big way.

In September, the University of Houston geophysicist and his team announced that Tamu Massif, an underwater volcano about a third of the way from Japan to Hawaii, is by far the largest volcano on the planet.

For two decades, using sonar and other undersea mapping methods, Sager has been studying an oceanic plateau in the northwestern Pacific called Shatsky Rise. Over several expeditions, he began to suspect that the subtly dome-shaped formation at Shatsky’s south end, which he named Tamu Massif, might be an enormous volcano.

To confirm his theory, Sager’s team drilled core samples and bounced seismic waves through Tamu’s layers to determine its composition. They discovered Tamu’s 120,000 square miles were made of massive lava sheets, up to 75 feet thick, that had erupted from a single summit about 145 million years ago.

In square miles, Tamu Massif is larger than Arizona. Its single summit dwarfs multi-volcano complexes, also known as composite volcanoes, on Hawaii and Iceland. With 75 percent of the volume of Mars’ gigantic Olympus Mons, Tamu ranks as the second-largest known volcano in the solar system.

Sager believes it’s possible that we may one day find even greater volcanic giants beneath the waves. For now, however, he is savoring a sweet moment 20 years in the making.

“As scientists, we spend our lives doing research,” says Sager. “We get maybe one moment when we can make people look up from their smartphones and be reminded of the wonder in the world.”

[This article originally appeared in print as "Earth's Biggest Volcano."]