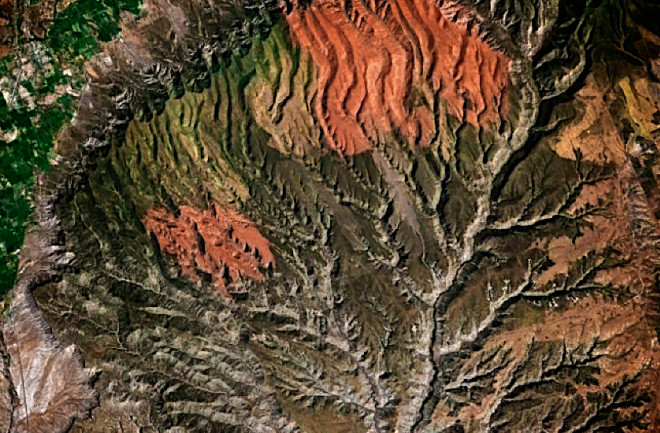 Erosion has carved a leaf-like form into the landscape, as seen in this satellite image accessed with Google Earth. Can you guess where it is? (Image: © 2013 Google) When I spotted this landform on one of my regular Google Earth tours around the planet, I was struck by how much it looks like an aspen leaf — in autumn, just as the leaves are beginning to turn. Where do you think it is located? I'll give you one hint: The prominent reddish tones are indicative of fire scars. [Update:In a comment below, Ron Broberg seems to have guessed correctly where this is. I'll come back later with further details.] Some information about the image itself: It is s screenshot from Google Earth. And I brought it into my Aperture photo application to process the image just a bit. First, I played with the curves to deepen the image. Next, I added a little sharpening and definition (local contrast) to make the relief stand. To emphasize the leaf-like structure, I darkened the corners of the image (with a vignetting tool), and did a bit of dodging (lightening) on the mid-tones of the leaf itself. Lastly, the reds in the original Google image were unnaturally intense, so I toned down their saturation and luminance. The result obviously is not what the scene would look like to an astronaut aboard the International Space Station. But this is, after all, Earth Art, so I think a little artistic license is warranted. My goal was to enhance the essential features of the scene — and then let it speak for itself. Where in the world do you think this is? Take a guess, let us know, and good luck!