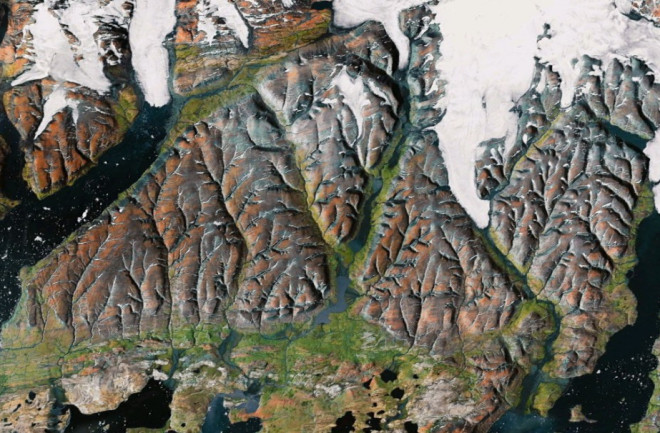 Drainages make a fractal pattern in this satellite image accessed with Google Earth. Can you guess where it is? (Image: © 2011 Google) Update

: We have a winner! Ron Broberg correctly identified this landscape as being on Novaya Zemlya, an archipelago off Russia's northern coast. In his answer, Ron even posted a link to a Google Maps satellite image showing the exact location. Check the end of this post for an overview map showing Novaya Zemla, as well as some fascinating information about this remote place. It served an important military purpose for the Soviet Union...

Being the remote sensing geek that I am, I often explore satellite images, looking for cool patterns and other features in nature. One that frequently catches my eye are fractals. In a recent post, I featured the amazing fractal drainage pattern cut into the sediments along the Platte River in Nebraska. Today, I offer up another fractal drainage pattern. As before, it is a screenshot of a satellite image I accessed using Google Earth. Can you guess where it is? I'll give only one hint: If you are guessing Alaska because of the glaciers, you're incorrect. This feature is not in the United States. For those new to the concept of a fractal, it is a pattern that is self-similar across many different scales. In the image above, you'll notice that the very smallest branches of the drainages look pretty much the same as the very largest ones. So, launch Google Earth, explore the globe, and try to figure out where in the world this is. Leave your answers below. And I'll come back later to declare a winner!

Novaya Zemlya is an archipelago off Russia's northern coast. The location of the fractal drainages pictured in the image at the top of this post is marked here with the red pushpin. (Image: © 2011 Google) The fractal drainages seen in the image at the top of this post are located in Novaya Zemlya. The archipelago consists of two main islands, and the drainages are on the northern one. Geologically, Novaya Zemlya is an extension of the Ural mountains. During the Cold War, Novaya Zemlya was vitally important militarily for the Soviet Union, serving as a site for testing of nuclear weapons. Here's an excerpt from a report by Columbia University and USGS researchers on the remarkable amount of testing that went on there:

At Novaya Zemlya (Russian for “New Land”), a total of 130 tests were carried out high in the atmosphere, at low levels above water, at the water/air interface, below water, and underground. These 130 tests entailed 224 separate explosive devices, including by far the largest atmospheric and underground tests of the Soviet Union, and that country’s only tests above and below water. About 265 megatons of nuclear explosive energy was released at Novaya Zemlya from 1955 to 1990, in some of the most extreme environments to be found anywhere on Earth. Contamination by radionuclides is apparent at some locations there today.