Earth Gripped by Record Warmth During First Half of 2015

Record warmth was seen in many places around the globe during the first half of 2015. Meanwhile, only one small area in the North Atlantic experienced record cold. The first six months of 2015 comprised the warmest first half of any year on record, surpassing the previous global record for January through June set in 2010. This past June also was the warmest in the 136-year record, according to the latest monthly update from the National Centers for Environmental Information. (Both NASA and the Japan Meteorological Agency have also ranked June as warmest on record.)

SEE ALSO: Japan Meteorological Agency: For the Globe as a Whole, June 2015 Was the Warmest on Record

As the map above shows, most of the world's land areas were much warmer than average, meaning they fell within the top 10 percent their historical temperature range for January through June. Vast swaths of the world's oceans were also much warmer than average at the surface, with record warmth dominating the northeastern and equatorial Pacific, a big portion of the North Atlantic, and the Barents Sea north of Norway. In particular, check out that swath of record warmth extending westward across the tropical Pacific from Central America. This is just what you'd expect during an El Niño year. And as the NCEI report points out:

If El Niño does continue to mature, as is expected, we can expect temperatures in the equatorial Pacific to stay high — and maybe even warm further. That could well mean 2015 will end up as the warmest year on record.

SEE ALSO: El Niño Continues to Bulk Up in the Pacific — and It May Get a Boost From the Pacific’s Surge of Cyclones

People critical of climate science have claimed that global warming actually has stopped. In fact, research shows that was never the case. But global warming did seem to slow down. Some research has shown that heat building up in the atmosphere due to human emissions of greenhouse gases was being sucked deep into the Pacific Ocean, helping to flatten the global warming trend. Now, changes in a natural climate pattern called the Pacific Decadal Oscillation may be starting to give some of that heat back to the atmosphere.

SEE ALSO: As 2015 Begins With Record Warmth, is the Pacific Primed to Dump Huge Amounts of Heat Into the Atmosphere?

At least some of the slowdown in global warming appears to have been spurious — the result of problems with the way scientists have determined temperatures across the globe's surface. In early June, researchers with NOAA announced that they had made some significant improvements. 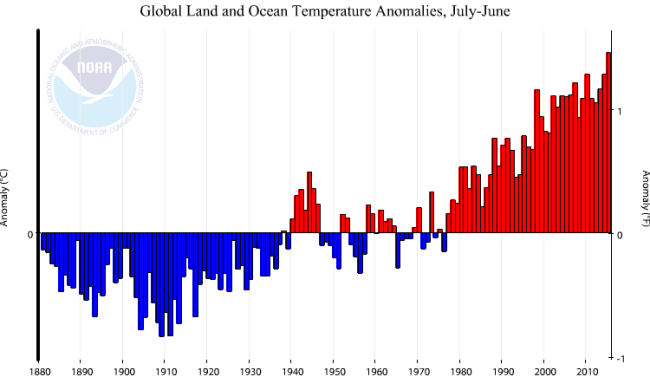 This time series shows how global temperatures varied from the long-term average for 12-month periods, each one ending in June. Contrary to what critics of climate science say, global warming clearly has not stopped. And the 12-month period ending this June was characterized by record warmth. (Source: NCEI/NOAA) The graph above shows how the temperature trend looks now, with the revised approach. There's certainly no hiatus in warming visible there. As a result of the revisions, the "overall character of the global temperature time-series remains largely unchanged," according to the agency. But some years and periods were affected by changes to how sea surface temperatures are determined. Among other things, the revisions included "updated and substantially more complete input data from ships and buoys," the agency says. 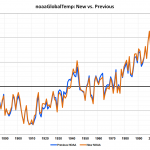 Source: NCEI/NOAA For more detail on this, please go here. And if you're wondering how much of a difference the modifications have made, click on the thumbnail graphic at right. The two lines show how global temperature has varied from the long-term average — the blue line calculated according to the old method, and the orange line according to the new one. (And here is how the changes have affected the rankings of the ten warmest years on record.) Nature is fickle, so it's possible that surface temperatures around the globe will cool during the second half of the year. But I really wouldn't bet on it. Based on what we know right now, 2015 is shaping up to be one humdinger of a hot year — maybe not where you or I live, but for the globe overall. If that happens, will we stop hearing claims that global warming has stopped? Politics being what it is — and given that we'll be heading into the heart of the presidential campaign season — probably not.