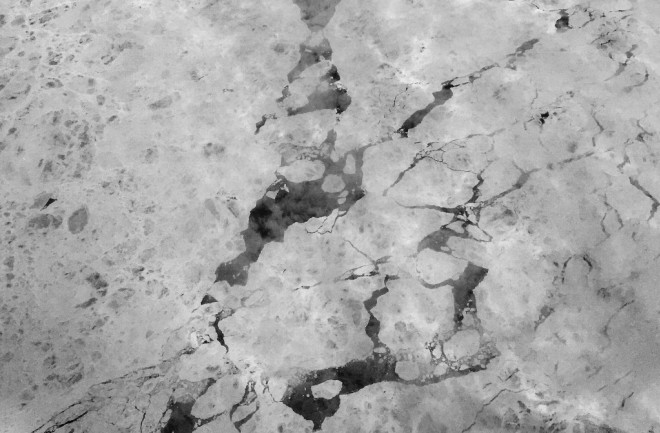 Breakup of Arctic sea ice in the Denmark Strait between Greenland and Iceland, as seen through the clouds from a commercial airliner on June 3, 2015. (Photo: ©Tom Yulsman) If you have followed this blog with any regularity you may have noticed that I haven't posted anything for awhile. I was on vacation in Europe and decided to take a break from blogging while I was gone. Now that I'm back, I thought I'd share some iPhone photographs of Arctic sea ice I shot while on the way back from Poland to Denver, via Frankfurt. There's a bit of a news peg, since the extent of Arctic sea ice in May was the third lowest in the satellite record, which extends back to 1978. As the National Snow and Ice Data Center put it recently:

Melt season is underway, and sea ice in the Arctic is retreating rapidly. At the end of May, ice extent was at daily record low levels.

Now that we are entering the month of June, the rate of ice loss is likely to quicken, but how fast will depend on the weather conditions and the date of ice surface melt onset across the high Arctic.

Hoping to get some photos of the seasonal sea ice breakup during my Lufthansa flight back from Europe, I parked myself by a door in the back of the 747-400 and gazed out the window and hoped the clouds would part. They finally did as we cruised 34,000 feet above the Denmark Strait. The photo above is the first one I shot. I've obviously done a fair bit of post-processing. Among other things, I converted the image to black and white, boosted the contrast and played around with the tonal values, all with an eye toward emphasizing textures and openings in the ice. The result strikes me as almost abstract (thus the headline).

Breakup of Arctic sea ice, as seen from a commercial airliner on June 3, 2015. (Photo: ©Tom Yulsman) This one is less abstract. I shot it just as we were about to pass over the Greenland coast. I love the contrast between the light colored ice and the very dark water. Obviously, the water isn't actually black. But even in color, that water appears quite dark. That's because its "albedo" — the amount of light reflected from its surface — is quite low, whereas the ice itself is very reflective. This is important because dark water absorbs more solar energy that bright, reflective ice. This, in turn, causes the water to warm up, thereby accentuating the long-term decline in the geographic extent of Arctic sea ice — a symptom of global warming.

A wide opening in Arctic sea ice just off the east coast of Greenland, photographed from the air on June 3, 2015. (Photo: ©Tom Yulsman) Make sure to click through these images, including this last one. In particular, look for darker spots on the surface of the ice. These may be melt ponds, and they are important, particularly at this time of year. According to the NSIDC, here's why:

September is the end of the warm season in the Arctic, and a time when sea ice begins to grow in extent again, after declining all summer. So just how low Arctic sea ice will reach come September may depend in part on what you're looking at in these images. One final thought about sea ice: Down in Antarctica, its extent reached a record high in May. But as I noted in a post last March, despite increases in the Antarctic, the global extent of sea ice — taking into account both hemispheres — has been declining at a rate of 1.47% per decade. I'll be back with additional posts soon, including one with images of a spectacular underground salt mine I toured in Poland. I also visited Auschwitz and am thinking about how to make my experiences there relevant for this blog. So please check back.