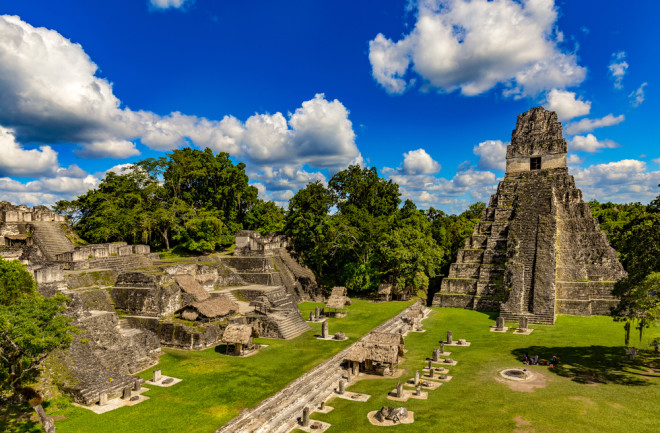 The view of the main plaza at Tikal. (Credit: WitR/Shutterstock)

Though today it is a wilderness, in the time of the Maya, the Central American lowlands they called home would have looked far different. Where emerald jungle canopies roll for miles on end, cities, roads, reservoirs and terraced fields would have covered the hilly landscape in southern Mexico, Guatemala and Belize.

Millions of people lived in the forest, members of a loose alliance of interconnected city-states. The Maya developed a system of writing, as well as a calendar system and sophisticated astronomical charts. In a world without metal, they built massive temples and irrigation networks through the thick rainforest.

And then their society collapsed upon itself.

Around 900 C.E., Maya civilization quickly, and for the most part, mysteriously, vanished. Though some members of their society would continue living in the area, the great cities lay for the most part abandoned. The all-consuming jungle quickly rose back up, swallowing the ruins of an entire civilization.

How it happened is the subject of much debate, though few certainties have emerged. Warfare, for one, seems to have become more common toward the end, and there’s evidence that a drought struck during that same time period. The actual impacts of the drought are less clear, however, as researchers have only been able to pick out a correlation between the two events thus far.

Now, a new study lends a little more weight to the drought hypothesis. It shows that rainfall during the end of the Maya Classic period, the time of their collapse, was roughly cut in half. That would have been a huge loss for a society largely dependent on agriculture. Coping with a drought of this magnitude would be difficult today. And for the Maya, who relied on a complex network of canals and reservoirs to sustain their crops, it could well have been deadly.

Researchers from Cambridge University and the University of Florida, Gainesville analyzed gypsum concentrations and the composition of oxygen isotopes from Lake Chichancanab on Mexico’s Yucatan Peninsula. The lake lies in the middle of what was once a Maya kingdom, and sediment layers from the bottom date back to the age of their rule. Oxygen isotopes and gypsum are two common measures of the paleoclimate because both are sensitive to the amount of rainfall a region gets. Heavier isotopes don’t evaporate as readily, so if researchers see an increase, it’s a sign that more water is going out than coming in — a drought. Gypsum is formed when sulfur precipitates out of lake water, another consequence of increased evaporation.

Using both measures, the researchers found that a severe drought began during the Terminal Classic Period sometime after 800 C.E. and again around 950 C.E., which is roughly the end of Maya civilization as we know it. Rainfall was reduced by around 50 percent on average, and by up to 70 percent during the most severe periods. The scientists published their findings Thursday in Science.

For a society whose diet consisted mainly of the holy trio of maize, beans and squash for survival, it could well have been a death knell. By the end of the Maya Classic Period, their population had grown far beyond what the landscape could support on its own. For centuries, ingenious Maya engineers had come up with ways to alter the landscape in their favor: Creating canals to irrigate fields, reservoirs to hold water through the dry season, turning wetlands to fertile soil, and carving terraces into hillsides. But even with these human enhancements the Maya remained at the mercy of nature’s beneficence. Eventually, it ran out.

As the drought dragged on, warfare, already somewhat common between antagonistic city-states, seems to have become even more prevalent. In addition, by denuding vast areas of their tree cover, the Maya may have created a landscape devoid of trees that could no longer hold on to water and precious nutrients, making farming more difficult and potentially exacerbating the effects of drought.

Little food and too much fighting likely led people to abandon cities as populations plummeted. It’s estimated that the Maya population dropped around 90 percent during this time. Those who did remain melted back into the jungle or squatted in cities in the shadow of greatness. At a few locations, such as Chichen Itza and Mayapan, the Maya did continue on, though they would never return to their former glory.

This study indicates that a drought likely played a significant role in the collapse of the Maya, though it doesn’t tell the whole story. Archaeological context is still necessary to understand what was really going on back then, and the story is likely much more complex than simply drought = collapse. We’ll have to wait for further research to know for sure.

But, even so, we do know that it’s a story that’s markedly unusual in the history of humanity. Though civilizations rise and fall, rarely does one vanish without another taking its place. Today, the land where the Maya lived is forest once again, filled with the cries of howler monkeys and thick tangles of vegetation. Villages are scattered throughout the area, but the forbidding landscape has forestalled large scale human encroachment. It’s made discovering what truly happened to the Maya difficult, though in recent years Lidar scans of the jungle have begun to peel back the canopy of give researchers a comprehensive view of what’s there. With new data, archaeologists are beginning to piece together the history of the Maya on a broad scale, and paleoclimate studies like this one are adding valuable context to those finds.

One day, we’ll understand how the Maya became so powerful and so sophisticated in a place we still haven’t seen fit to re-enter. And when we do, we’ll hopefully know why they collapsed as well.

[Correction 8/9/18: This article has been updated to clarify that the Maya did not disappear, but their civilization collapsed. We regret the error]