A vast region is arguably in crisis, and not just because of brutal wildfires. Farmers, ranchers, indigenous people and others are all suffering — with no end in sight. 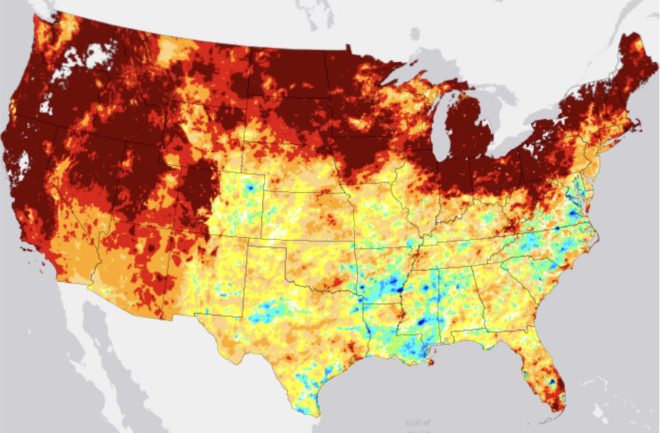 By one measure, almost 100 percent of the West is now in drought. And that sets an all-time 122-year record, accoring to David Simeral, a climatologist at the Desert Research Institute and the Western Regional Climate Center.

That measure, called the Palmer Drought Index, takes into account both moisture and temperature to provide a good view of long-term drought, as well as the impact of global warming.

Using another measure, the kind you may be accustomed to with the standard U.S. Drought Monitor, about 90 percent of the West is experiencing some level of drought, with 57 percent in extreme to exceptional drought, the two worst categories.

"This week marked a milestone in that this is the highest percent area of drought in the western United States since the Drought Monitor started in 2000," says Simeral, who spoke on July 20th at a webinar about the continuing crisis.

So however you want to look at it, what's happening in the Western United States right now is truly historic, and the word "crisis" really is no exageration.

Virtually the entire country, not just the West, has experienced the effects of the drought in the form of smoke from wildfires. As I pointed out in a post yesterday, that smoke has spanned the country from east to west, and from Canada to Mexico. The smoke has even drifted all the way across the North Atlantic to Europe.

"We've had a very early start to the fire season this year," observes Nicole Vaillant of the U.S. Forest Service in Northern California and a fire management specialist with the Rocky Mountain Research Station.

The West in general, and California in particular, saw low snowpack this winter and then an early melt-off. Hopes for some relief from springtime precipitation were dashed, and then multiple heat waves set in, says Vaillant, who also presented data at the drought webinar.

The result: 100 percent of California is in drought, and a third is experiencing exceptional drought. That means vegetation is extremely dry and prone to burn.

The GOES-16 weather satellite captured this view of two big wildfires blazing in California on July 21, 2021. The Dixie Fire is the one to the north. As of the 21st it had scorched almost 104,000 acres. The Tamarack Fire, at about 50,000 acres, is to the south. (Credit: RAMMB/CIRA)

Vegetation is so dry that fires are spreading rapidly and growing large even without big wind events. "We're seeing fire behavior that's not typical, especially for July," Vaillant says.

Beyond wildfires, the historic drought is causing other terrible impacts as well.

"Western farmers and ranchers are facing a brutal growing season as drought conditions drastically reduce water deliveries," says Dan Keppen, Executive Director of the Family Farm Alliance, a non-profit water organization with members in 17 western states. "Many are being forced to make difficult decisions about their operations."

And not just their operations are at stake. "No water for a farmer means no crops, no food, and a very limited ability to take care of his or her family," Keppen says.

Among a number of national agricultural impacts, drought in Washington State, and parts of the High Plains and Midwest, is having a dramatic impact on wheat production. "Initial estimates released by USDA on July 12 indicated that the 2021 U.S. spring wheat production will be down 41 percent from last year," according to this week's U.S. Drought Monitor report.

The two largest reservoirs in the West, Lake Mead and Lake Powell on the Colorado River, are at historic or near-historic low levels. In an excellent story about the situation for KUNC, a public radio station in northern Colorado, Luke Runyon points out that the Colorado River — source of water to 40 million people — "is tapped out." As a result, another form of history is about to made: For the first time ever, this summer the federal government will declare an official shortage on the river.

"The coming shortage declaration, tied to the level of the nation’s largest reservoir, Lake Mead, means another round of steep cuts to water supplies, falling the hardest on Arizona farmers who rely on the Central Arizona Project," Runyon writes. "If Mead keeps dropping, further reductions are coming to more Arizona users, Nevada, California and Mexico." (In the interest of full disclosure, Runyon will be a participant in the Scripps Fellowships in Environmental Journalism starting in August, a program I direct at the University of Colorado.)

Shasta Lake is seen here in this image acquired by the Landsat 8 satellite on June 16, 2021. The light tan "bathtub ring" outlining the lake shows areas of the lakebed that would be underwater if the reservoir were filled closer to capacity. Currently, it's at just 46 percent of its historic average. Shasta Lake is the largest reservoir and third largest water body in California. (Credit: NASA Earth Observatory)

Many other reservoirs in the West are running short on water. California's two largest, lakes Shasta and Oroville, are at 46 and 37 percent of their historical averages respectively, according to Simeral.

Navajo farmers and people who make a living by raising cattle have been very vulnerable. Also hard hit have been "a large number of Navajo families who feel it is very important to keep and maintain a herd or flock of sheep to maintain traditional cultural ties to the land," Becker says.

Evolution of the Drought

By the week-to-week metrics of the U.S. Drought Montior, most of the West was drought-free in the spring of 2020. But then a very poor monsoon season in summer caused drought to ramp up quickly in the Southwest. And it turned out to be the driest June through September on record in the Four Corners states, according to Simeral. Recording-breaking summer heat only made things worse.

During the cool months, large parts of the West experienced a snow drought, along with abnormally warm conditions. "Then a big warmup in spring led to poor runoff, and expansion and intensification of drought in California and the Great Basin," Simeral says. "And now, we've seen record-breaking heat in the Pacific Northwest, which really made things much worse in that area."

Perhaps most important is that this is part of a bigger picture: two decades of drought in the western United States, and particularly the Colorado River Basin. During the period, average temperatures have been consistently above normal, thanks to human-caused climate change, with below normal preciptiation punctuated by only a handful of intermittent wet years.

Unfortunately, there's no relief in sight in coming months.