Drillers Tap Into a 1000-Degree Magma Chamber by Accident 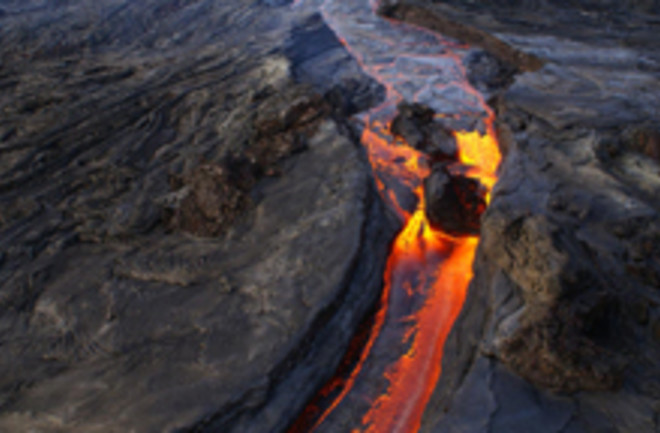 In a happy accident for science, a geothermal energy company drilling a borehole near the Hawaiian volcano Kilauea drilled right into a magma chamber, giving researchers a glimpse of a primal geological force. The unprecedented discovery could act as a “magma observatory,” allowing scientists to test their theories about how processes transformed the molten rock below Earth’s surface into the rocky crust that humans live on today [Wired News].

Volcanologist Bruce Marsh described the discovery at the ongoing meeting of the American Geophysical Union, saying that it’s “the first time a magma has been found in its natural habitat…. Before, all we had to deal with were lava flows; but they are the end of a magma’s life. They’re lying there on the surface, they’ve de-gassed. It’s not the natural habitat. It’s the difference between looking at dinosaur bones in a museum and seeing a real, living dinosaur roaming out in the field” [BBC News].

The geothermal company, Ormat, was looking for hot underground rocks that could be used to generate steam that would drive a turbine, and began drilling near Kilauea on the Big Island of Hawaii in 2005. After digging 2.5 kilometers (1.6 miles) deep, workers noticed something unexpected emerging from the well, said William Peplow, a consultant geologist for the drilling project…. The temperature of the magma reached 1050 Centigrade, but it cooled into clear glass when it rose about 8 meters (26 feet), thanks to the cold drilling fluid being pumped into the well as part of the drilling process [Greentech Media].

Tests revealed that the substance was dacite, an unusual type of magma that is chemically distinct from the basalt which forms nearly the entire mass of the Hawaiian Islands and the surrounding oceanic crust [BBC News]. It’s thought that dacite forms naturally from basalt, and that the dacite can then harden into the granite that forms the core of the earth’s continents. According to Marsh, it’s possible that the magma observatory is giving scientists a view of the differentiation process by which continents first formed out of the oceanic basalt.