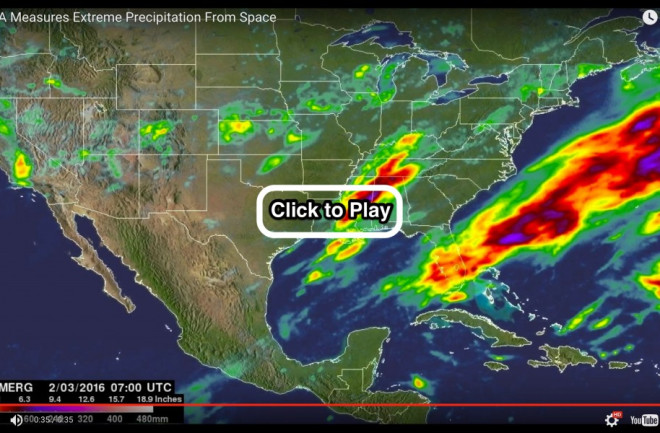 Data from multiple satellites were used as part of the NASA IMERG program to produce an animation showing estimated precipitation over the U.S. lower 48 states and surrounding areas from Jan. 25 through Feb. 3. The most extreme precipitation — 7.9 inches in total — occurred over Mississippi and Alabama. (Source: NASA/JAXA/SSAI, Hal Pierce) Juiced up by El Niño, extreme weather raked the United States from the last week of January through the beginning of February. And thanks to satellites above, as well as cameras on the ground, we can witness all of the action — with synoptic views of a swirling winter storm and a beautiful visualization of total precipitation; a closer view of the atmosphere bubbling like stew in a cauldron; a look right into the heart of a massive thunderstorm; and right down to an individual tornado touching down near a house in Georgia, prompting a little girl to ask her mom, "Are we gonna' die?" Let's start with the animation above, which captures a full 10 days of the extreme weather. Using data acquired by a constellation of satellites, it shows estimated precipitation between Jan. 25 and Feb. 3, providing a kind of timeline for all of the action. Toward the beginning of the animation, on Jan. 26th, look for a line of storms developing over Louisiana and Mississippi. The storminess then spreads to Florida on the 27th, where twisters tossed cars about with abandon. This was actually just the latest in a terrible spate of tornados to hit Florida, which experienced more than double the normal activity during January. The storminess continues out over the Atlantic, but divert your attention up to the Pacific Northwest and watch the gradual spread of green, yellow and orange colors indicative of accumulating precipitation. Then, on January 31st, the action spreads south into California with a storm born in warm Pacific waters and swept ashore by a sub-tropical jet stream on El Niño steroids. After adding to California's much need snowpack, this storm spins up across the desert Southwest, and then takes its time over Colorado, dumping 16 inches along the Front Range where I live. We're now toward the end of the animation, but there's still a lot of extreme action to come... Northeast across the High Plains the storm goes, traced in the animation by spreading tones of green and yellow indicative of accumulating snowfall. It then lumbers and thunders into Wisconsin, where it does, indeed, spawn thundersnow (thunder, lightning and snow together). The most extreme weather happens next, and only a little bit of it is captured by the animation above. So next, have a look at this Tweet, with a video capturing the stunning impact of a tornado that ripped into a high school campus in Tennessee: https://twitter.com/weatherchannel/status/695335565844041728 That was just one of at least a dozen tornados in Alabama, Mississippi, Tennessee, South Carolina and Georgia during Tuesday and Wednesday. Feb. 2 and Feb. 3. Check out this video of a twister that touched down in Fort Stewart, Georgia on Feb. 3 — and listen for the child who asks her mother whether they are going to perish: https://twitter.com/NDilbeck_Wx/status/695040884656771072 Here's what happened: As the snowstorm blew up through the Midwest, a cold front ahead of it collided with warm, moist air drawn up from the Gulf of Mexico. You can see the clash in this satellite image showing atmospheric water vapor: https://twitter.com/SimonStormRider/status/694618023358001152 Check out the powerful, cyclonic winter storm over the heartland, with copious moisture indicated by a big blob of magenta over the Upper Midwest. Also look closely along the storm's eastern flank. Here, you can make out smaller blobs of magenta indicative of thunderstorms starting to form over Mississippi and Tennessee. Right along that line of collision between the cold air and the warm, moist air streaming up from the Gulf, it was as if the atmosphere was a boiling cauldron. And that's exactly what it looks like in this remarkable animation of GOES-14 weather satellite images showing thunderstorms bubbling up over Mississippi and Alabama:

The development of tornado-spawning thunderstorms in eastern Mississippi into western Alabama on Feb. 2 and 3 is captured in this animation of images from the GOES-14 weather satellite. The red boxes show counties where tornados were reported. (Source: CIMSS Satellite Blog.) GOES-14 is actually a spare satellite that operates between two others — one that covers the western portion of the United States and the other the eastern part. It is being used by scientists in experiments designed to pave the way for a new satellite called GOES-R, which will have much greater capabilities than the current generation of satellites. As part of those experiments, GOES-14 can be put into "rapid scan" mode, in which it captures an image every minute, as opposed to every 15 minutes for its two siblings. That's what went into the animation above. One-minute imagery like this "is amazing," says Bill Line, a researcher at the University of Oklahoma's Cooperative Institute for Mesoscale Meteorological Studies. "You can see convection as it is developing — individual features bubbling."

A sprawling line of thunderstorms from the U.S. Gulf Coast up through a large section of the Southeast was spied by the Suomi NPP satellite's VIIRS instrument on February 2, 2016. (Source: NOAA Environmental Visualization Laboratory.) The image above, from the Suomi NPP satellite, shows a more synoptic view of the storms. The sharp line between clouds and clear skies on the lefthand side marks the position of the advancing cold front. Now, let's zoom in close — right into the very heart of a cluster of thunderstorms:

3-D view of violent thunderstorms over North Carolina and Virginia, created using data from NASA's Global Precipitation Measurement satellite. (Source: NASA/JAXA/SSAI, Hal Pierce) This three-dimensional view, created with data collected by NASA's GPM satellite, shows a cross section through violent thunderstorms over North Carolina and Virginia on Feb. 3. The deepest red colors show where precipitation was heaviest. Estimated rainfall here exceeded four inches per hour. The storminess then continued into February 4th, with heavy rain from the southern Mid-Atlantic Coast and up into New England. Here's NASA warning about what we can expect in weeks to come: "Due to the current strong El Nino, extreme precipitation events are expected to continue through the winter." That may well be true for large parts of the United States. But will it be true for California, which is still in desperate need of precipitation to relieve an epic drought? There are some concerning signs from weather model forecasts that California could dry out this month, just when it should be getting a thorough dousing from El Niño. But as I'm writing this, these long-range forecasts don't have enough "skill" yet to offer anything we can bet on with confidence. Stay tuned...