Atmospheric methane — the very potent "other" greenhouse gas — is rising at a shocking rate. Research fingers fracking as a major culprit. 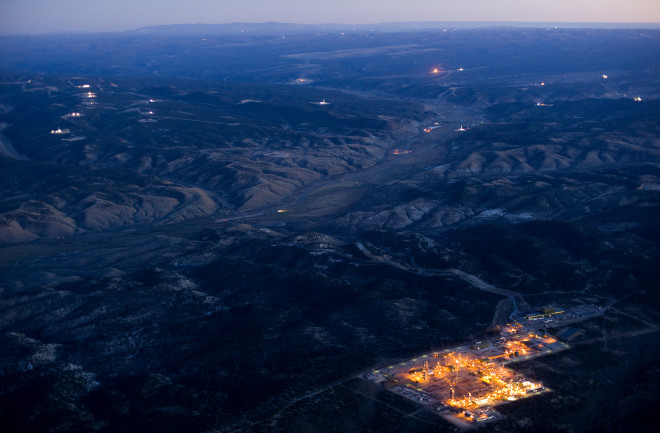 Natural gas, which consists primarily of the potent greenhouse gas methane, is flared off at dusk in western Colorado's Piceance Basin. As crude oil production has outpaced construction of infrastructure to transport natural gas extracted during oil production, it has been flared and even vented directly to the atmosphere. (Credit: © ecoflight)

Last week brought news that 2021 was shaping up to be quite cool globally. And now, as if to underscore it, an unusual May snowstorm is poised to blast Montana's mountains.

But global warming definitely has not gone on holiday. As I wrote in my previous post, we're most likely just seeing the temporary cooling influence of La Niña. Meanwhile, over the long run, our emissions of greenhouse gases are continuing to push the climate system further and further out of balance.

In fact, NOAA announced in April that levels of both carbon dioxide and methane "continued their unrelenting rise in 2020," despite the pandemic-induced economic slowdown.

Methane is of particular concern. It is a "potent greenhouse gas tens of times more powerful than carbon dioxide at warming the atmosphere," states a major assessment published earlier this month by the United Nations Environment Program. "Methane’s atmospheric concentration has more than doubled since pre-industrial times and is second only to carbon dioxide in driving climate change during the industrial era."

To make matters worse, the growth rate of methane in the atmosphere is increasing faster now than at any time since the 1980s, according to the report. It's a trend that Columbia University climate scientists James Hansen and Makiko Sato last week called "shocking."

How Much of a Culprit is Fracking?

Hansen and Sato attribute this rise in large measure to the boom in fracking — the injection of hydraulic fluids into shale formations to release oil and gas. But there are other methane sources too, including cattle and other livestock, landfills, rice paddies, coal mining, and wetlands.

With that in mind, I decided to do some reporting to see if I could track down just how much of a contribution fracking in particular has been making to methane levels.

The globally-averaged, monthly mean abundance of methane in the atmosphere between 1983 and January of 2021. In recent years, the growth rate of atmospheric methane has increased. (Credit: NOAA Global Monitoring Laboratory)

As it turns out, some research actually contradicts Hansen and Sato's claim. It suggests that since 2006, increased emissions of methane from agriculture and other biological sources, not fossil fuels, is primarily responsible for the atmosphere's rising burden of the heat-trapping gas. In fact, some studies have suggested that emissions of methane linked to fossil fuel operations actually decreased globally since 2006.

But what about that fracking boom in the United States, and in particular the ample evidence of huge methane leaks associated with it? Given that, common sense tells me that a decrease in methane emissions from fossil fuels is unlikely.

And, in fact, a 2019 study, published in the journal Biogeosciences, supports a much more significant role for fossil fuels in general, and for fracking in particular, in methane's meteoric rise.

An animation of satellite images shows huge growth in the number of oil and gas wells and related facilities on the plains north of Denver, Colorado between 1984 and 1920. (Credit: Satellite imagery from Google Earth. Animation by Tom Yulsman)

“This recent increase in methane is massive,” notes the study's author, Cornell ecologist Robert Howarth, quoted in The Guardian. “It’s globally significant. It’s contributed to some of the increase in global warming we’ve seen, and shale gas is a major player.”

What does he mean by "major"? His research shows that increased methane emissions from fossil fuels likely have exceeded the increases from biological sources, including agriculture, since 2007. And the primary fossil fuel culprit has been fracking in the United States.

Looked at more broadly, the study found that a third of the increased emissions from all sources globally — including from agriculture as well as fossil fuels — has been the result of U.S. fracking operations.

Some scientists have been skeptical about Howarth's specific numbers on fracking, citing concerns about his chemical fingerprinting approach. But there's widespread agreement that the production, processing, storage, transmission and distribution of natural gas and oil are responsible for a significant portion of the world's methane emissions.

The International Energy Agency estimates that oil and gas operations worldwide emitted a little more than 70 million tons of methane into the atmosphere in 2020. The climate impact of all that methane is equivalent to all of the energy-related emissions of carbon dioxide from the European Union last year.

Cutting Methane is a Fast Way to Limit Global Warming

But there is a flip side to this dark coin. Although methane is much more potent as a greenhouse gas than CO2, it also lingers in the atmosphere for much less time. So if we were to significantly reduce methane emissions, the stuff we've already pumped into the atmosphere would disspiate relatively quickly.

The bottom line is that cutting methane emissions now can make a big and rapid contribution to limiting the rate of warming in the near-term.

"Reducing human-caused methane emissions is one of the most cost-effective strategies to rapidly reduce the rate of warming and contribute significantly to global efforts to limit temperature rise to 1.5°C," according to the U.N. Environment Program assessment. We have the means to cut methane emisions 45 percent by 2030, it concludes.

Since methane not only forces the climate but also is a key ingredient in the formation of ground-level ozone pollution, cutting emissions by 45 percent would have a range of significant benefits. Among them: prevention of 260,000 premature deaths, 775,000 asthma-related hospital visits, 73 billion hours of lost labour from extreme heat, and 25 million tons of crop losses annually, according to the report.

Those numbers are, of course, estimates. But there's simply no doubt that reducing methane emissions would do us a world of good.