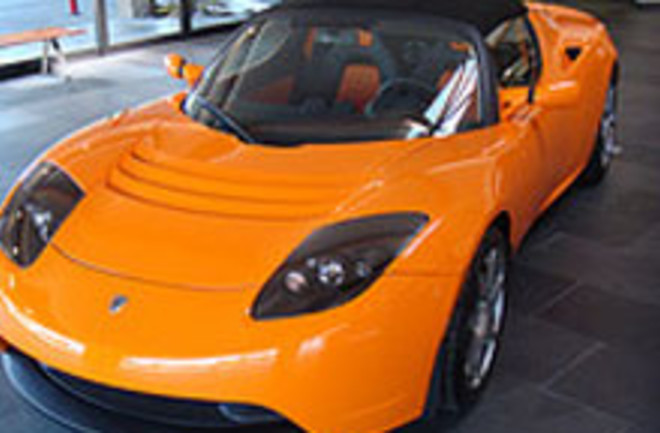 The Department of Energy is handing out nearly $8 billion in loans today, and $465 million of the funds will go to Tesla Motors to produce its Model S electric sedan, the company's first attempt at a mass-market car. The company already manufactures the Roadster, a high-performance electric sports car. Nissan and Ford Motor Company will receive the other loans; they'll get $1.6 billion and $5.9 billion, respectively, to help produce fuel-efficient cars. Nissan will use the funds updating a plant in Tennessee to produce the company's upcoming electric sedan, and Ford's loan will help expedite production of cars that go farther on less fuel.

Tesla was perhaps the wild card in the funding equation because it is a small startup. The company has delivered slightly more than 500 Roadsters to customers, and the government loan will help pay for a Southern California manufacturing plant for the Model S sedan, due in 2011. A second plant in the Bay Area will make battery packs and electric drivetrains [The New York Times].

These loans are the first to be doled out under the Advanced Technology Vehicle Manufacturing Program, which has set aside $25 billion to defray the cost of producing environmentally friendlier cars.

“We have a historic opportunity to help ensure that the next generation of fuel-efficient cars and trucks are made in America,” [President Obama] said in a statement. “These loans ... will create good jobs and help the auto industry to meet and even exceed the tough fuel-economy standards we’ve set while helping retain our competitive edge in the world market" [Wired.com].

The Department of Energy's loan to Tesla is a sign of faith in the young company, which has struggled to raise money during the economic downturn. The loan

plus Daimler’s recent $50 million investment for a 10 percent stake in Tesla will go a long way in bringing the Model S to market more quickly. [The Model S] has an anticipated base price of $49,900 after a $7,500 federal tax credit, Tesla said in a press release today [BNET].