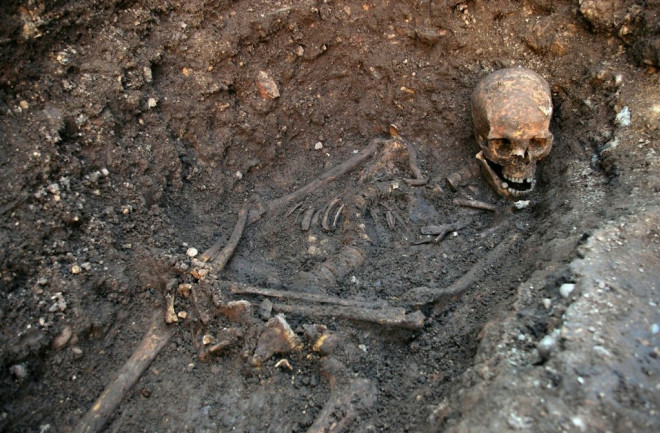 Image courtesy of University of Leicester.

In their search for the lost grave of King Richard III, archaeologists unearthed a skeleton from underneath a parking lot last August. Today researchers announced that the skeleton is indeed that of England's 500-year-deceased king, and they have the DNA and radiocarbon dating to prove it.

, which was written a century after his death. This English king

reigned for just over two years, but his body was buried without record of its exact location. Researchers began digging up the vicinity of Greyfriars

church in Leicester in 2011, and today's announcement is the scientific evidence they needed to make their case for a definitive identification. The parallels between the scientific findings and historical accounts of Richard III are many:

• Radiocarbon dating determined the body to have been buried in the late 15th or early sixteenth century. Historians say Richard III died fighting in the War of the Roses in 1485.

• Skeletal examinations determined the body to be in its 20s or early 30s at the time of death. Richard III was apparently 32.

• The skeleton showed no signs of the withered arm portrayed in Shakespeare's account, but it did fit the descriptions from Richard III's contemporaries: short, slim and with a very crooked spine.

• The body shows evidence of ten wounds, including two fatal blows to the skull. Richard III was thought to have died from a blow to the back of the head.

But Richard III was not the only 30-something with scoliosis in the Middle Ages. The real proof of the skeleton's identity came from the DNA analysis. Samples from the skeleton overlapped with the genomes of two living relatives descended from Richard's maternal line. Finally, then, the king can be put to rest in a proper burial spot - and for historians, a long winter of discontent

comes to an end.