D.J. Grothe on the New Hosts at Point of Inquiry 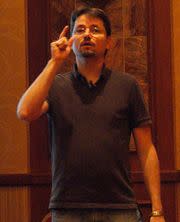 The Point of Inquiry podcast would be nothing without its founder and host, D.J. Grothe, who has now moved on to serve as the president of the James Randi Educational Foundation. I'm pleased that DJ has commented on the new hosts, including yours truly:

All three of the new hosts are perfect for their new roles. I first met Chris Mooney in the late '90s when I was just getting involved with CFI while in grad school. Over the years, I have really enjoyed seeing him succeed at bringing the public's attention to important issues of science education and public science policy, both through his best-selling books and his national media appearances. And I've enjoyed interviewing him a number of times on Point of Inquiry. Bob Price, an engaging thinker on matters of historical Biblical criticism and popular nonsense claims, will be an excellent host for episodes dealing with religious skepticism. I have known Bob and have admired his work for many years, and recently had the pleasure of spending a weekend with him in the middle of Missouri at a skepticism conference. He is one of the best conversationalists I know, and one of the most popular guests we've had on Point of Inquiry. Karen Stollznow is a rising star in the skeptical movement, and an active paranormal investigator. She has experience with podcasts and I think she will bring a fresh perspective to discussions of the paranormal and pseudoscience. I sincerely wish all three new hosts well, and look forward to seeing what Point of Inquiry becomes going forward.

. And I want to personally thank him for his vote of confidence. I know I have shoes to fill....