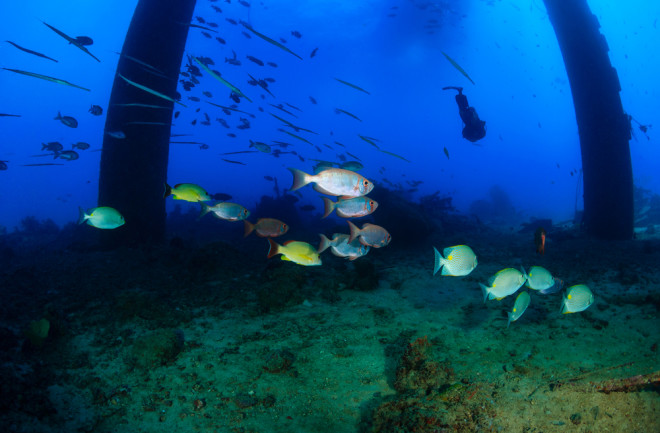 Offshore oil rigs have become refuges for marine species around the world. But now many of these sites are being dismantled. (Credit: Richard Whitcombe/shutterstock) The rugged North Sea, between Norway and the United Kingdom, once held some of the world’s most productive offshore petroleum fields. And across the region, oil rigs still tower above the ocean floor — their beams crisscrossing up from the watery depths like mechanical mountains. But with productivity and oil prices in decline over recent years, hundreds of these structures are now set for removal. It’s a day that environmental groups have waited decades to see. Yet some scientists are concerned. A growing number of studies show that these platforms support thriving ecosystems with important coral reef and fish communities. But most of this research has focused on oil rig ecosystems off the coast of California and the Gulf of Mexico. Little scientific work has been done on the petroleum platform settlers in the North Sea. “Some rigs seem to help sustain fish, not just by attracting them to the structure to feed on all the lovely critters that live on the rig, but to mate, spawn and act as nurseries,” says Lea-Anne Henry, a marine ecologist at the University of Edinburgh in Scotland. She and her colleagues wanted to know if these North Sea structures had the same benefits as those studied elsewhere.

To find out, they made a computer model of the region’s oil rigs and other human-built structures, like wind turbines. Then they released virtual larvae — like those that create coral reefs — and watched them spread. The team discovered that these networks of oil rigs can help threatened species migrate throughout the North Sea, moving from rig to rig and settling into new natural environments as well. That kind of colonization could help species expand their geographic ranges even while climate change shrinks livable ocean habitat elsewhere. As a secondary benefit, it could also help prop up commercial North Sea fisheries. “These results provide the first study showing that a system of anthropogenic structures can have international conservation significance by creating ecologically connected networks and by acting as stepping stones for cross-border interconnection to natural populations,” the authors write. Their study makes a lot of sense to Milton Love, a fish biologist at the University of California, Santa Barbara, who wasn't involved with the research. His own work off the coast of California has shown how reefs can help prop up overfished species. "Really, the decision of what to do with platforms that are uneconomical to operate involves both science and philosophy," Love says. "There is a growing body of research that demonstrates that at least some platforms probably increase the numbers of at least some marine species." Nonetheless, he says, many people are uniformly opposed to the idea of leaving artificial structures in the ocean, regardless of these new pop-up ecosystems.

The findings come amid a controversy over the fate of oil platforms worldwide. In the U.S., federal law requires companies to remove their platforms once they're no longer productive. But there are some short-term exemptions. For example, California law allows oil companies to convert their derelict derricks into reefs by removing the top sections and leaving the deep-sea portion behind. This process removes the eye sore and any hazard to ships, but leaves behind the reef in a process commonly called Rig-to-Reef. However, few U.S. companies have gone this route so far, citing onerous regulations. And Ed Chesney, an ecologist at the Louisiana University Marine Consortium who wasn't involved in the study, says U.S. companies still can't legally leave platforms in shallow waters, where officials worry about shipping hazards. That's a problem because shallower waters, like the ones he studies along the Gulf Coast, are typically better for reefs anyway. "In our area, the effects we've observed are overwhelmingly positive for fish and other biota," Chesney says. And in the North Sea, oil companies don’t have any option to convert rigs into permanent reefs. They're governed by the so-called Oslo-Paris Agreement, which was developed after Shell Oil proposed dragging their rigs out to deeper waters and dumping them in the mid-1990s. The idea angered Green Peace and other ocean advocates, who shut the effort down by occupying the oil platforms. Now, all rigs there have to be dismantled. Henry says that, if her computer models are correct, that policy could be bad news at two rigs in particular. This pair of platforms support unique coral colonies downstream in Norwegian waters and act as “lifelines,” letting otherwise isolated populations breed with their far-off kin. “We’re now on an aggressive coral-collecting campaign with the operators, their deep-sea dive teams and ROV crews to sample corals for genetic analysis so we can ground-truth what our simulations suggest,” Henry says. However, wind turbines are only increasing in the world's oceans, Chesney says. That could offer some opportunity for new artificial reefs to replace the old. “We should still strive for a clean seabed,” Henry says. “But we also shouldn’t view a rig left in place as a bad thing necessarily. Our study shows that some rigs can maybe have conservation benefits to ecosystems.” Their results were published August 16 in the journal Nature.