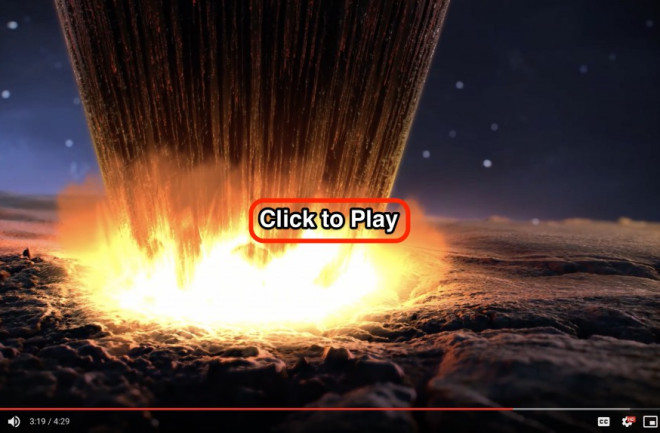 An international team of scientists has discovered a massive meteor crater under a glacier at the edge of the Greenland ice sheet. This artist's rendition shows what the meteor impact might have looked like. (Source: NASA's Goddard Space Flight Center/Jefferson Beck) A very curious feature has long been visible in satellite images of Greenland's massive ice sheet, but until now, no one really knew for sure what formed it.

The edge of the Greenland Ice Sheet includes the semi-circular feature seen in this image acquired by NASA's Aqua satellite on July 17, 2918. Beneath it is a newly discovered meteor impact crater. (Source: NASA Worldview) You can see the feature for yourself in the satellite image at right — look for the conspicuously semi-circular edge to the ice sheet. As it turns out, that semi-circular shape hints at what's below a layer of ice more than a half mile thick: a massive impact crater that has been hiding in plain site. Research shows that it was gouged out of Greenland's bedrock by a large iron meteorite more than a half mile wide. The object crashed to Earth less than 3 million years ago and possibly as recently as 13,000 years ago. The resulting bedrock basin subsequently was covered by ice. And today, the edge of that ice traces the edge of the crater down below. The crater, revealed in detail by airborne radar measurements, "is exceptionally well-preserved, and that is surprising because glacier ice is an incredibly efficient erosive agent that would have quickly removed traces of the impact," says Kurt Kjær, a scientist at the Natural History Museum of Denmark. He is lead author of a study on the new findings, published in the Nov. 14 issue of the journal Science Advances. Kjær was quoted in a recent NASA release about the discovery. https://youtu.be/xt-Qcdo8w54 The massive meteorite impact scar is about 19 miles across. That means New York City would almost fit inside it. And given its depth of about 1,000 feet, three Statue of Liberty monuments could be stacked one atop the other inside the crater with room to spare. The crater is among the 25 largest on Earth, and it's the first one of any size ever found under the polar ice sheets. The researchers first spotted signs of the crater in July 2015. Those signs came from data produced with ice-penetrating radar from NASA’s Operation IceBridge, as well as earlier NASA airborne missions in Greenland. As NASA puts it, those signs pointed to "an enormous, previously unexamined circular depression under Hiawatha Glacier, sitting at the very edge of the ice sheet in northwestern Greenland." Imagery from NASA's Terra and Aqua satellites showed evidence of a circular pattern on the ice surface matching the topography of the suspected crater. To confirm that this was indeed a depression gouged out by a meteorite, scientists from Germany’s Alfred Wegener Institute flew over the Hiawatha Glacier to map the area with a state-of-the-art ice-penetrating radar. "The survey exceeded all expectations and imaged the depression in stunning detail: a distinctly circular rim, central uplift, disturbed and undisturbed ice layering, and basal debris — it’s all there," says Joe MacGregor, a NASA glaciologist at Goddard Space Flight Center. Quartz fragments collected on the ground helped confirm the diagnosis. They showed signs of extreme shock — like what would occur to rock during a massive impact. An event of this size should have affected Earth’s climate, "with major consequences for life on Earth at the time," according to NASA. Future research will look for signs of those consequences. https://youtu.be/vTr3VdGlFr8 Check out the video above for an in-depth look at the discovery.