Digging Deep: How to Feed the World With Perennial Food Crops 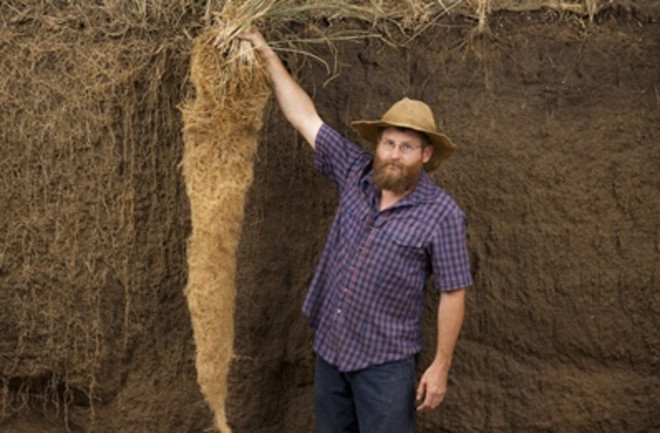 More than 9 billion people will live on Earth by 2050. They’ll need to eat somehow, but we’re already running out of arable land. And many types of agriculture — including conventional farming of annual crops, which need to be replanted each year — leave fields nutrient-poor, reducing future productivity.

But soil scientist Jerry Glover is optimistic about feeding more people while conserving farmland soil. The solution, he believes, is to focus less on annual crops, which dominate world agriculture, and to embrace instead the potential of perennials, crops that can be harvested more than once without replanting.

Glover, a senior sustainable agricultural systems research adviser at the U.S. Agency for International Development (USAID), spent years as a researcher at the Land Institute in Kansas. There he realized the state’s perennial grasses might hold the secret to protecting soil, reducing fertilizer use and getting multiple harvests out of one plant.

Farming, Glover discovered, could have a neutral, even positive, impact on the agricultural ecosystem. In 2008, Nature named 48-year-old Glover one of five “crop researchers who could change the world.” Discover talked with Glover about his plan for doing just that.

Discover: Did growing up on a farm in drought- and dust-prone eastern Colorado shape your professional views?

Jerry Glover: I was certainly influenced by conditions there. I was seeing agriculture’s tremendous damage to soil. But I also saw the potential and need for agriculture. I think we now have to look soberly at how our civilization has come about at the expense of the soil resource.

What do you think are the most damaging effects of conventional agriculture?

JG: Farmers harvest nutrients from the soil when they harvest their crops. And some of the nutrients are lost there on the farm through runoff — more than 50 percent of the nitrogen applied to wheat crops is lost before harvest. We need to close that loop. One of the biggest openings for that is to make sure that the nutrients that we put back onto the farm stay on the farm field and are used by the plants.

Glover pauses from his research on perennial trees to chat with Rhoda Mang'anya and her children on a her farm in the Dedza district of Malawi in Africa. Jim Richardson

Most farmers grow annual crops, which have to be planted every year.

But in your research, you noticed that perennial grasses could be harvested repeatedly to make hay, with hardly any added fertilizer and without robbing the soil of essential nutrients like nitrogen and phosphorus.

Are perennial food crops the answer to feeding the world in the coming decades?

JG: I think they could be. Perennial crops can be grown for more than two years alone or alongside annuals, and they can radically improve soil health and support a healthier community of bacteria and fungi underground.

Annuals have to develop roots every year, which means their growing season is much shorter. Perennial roots go deep — some as deep as 10 feet — and they will sustain the plant for many years. Way down there, the roots can capture more groundwater. Those deep, better-established roots also help cycle nutrients in the soil and make them more available to plants.

And of course, the No. 1 [advantage of perennials] is preventing soil erosion. With better soil conditions, water will soak in instead of run off. Perennials also cover the soil for a longer period of time with plant material. So when the rain falls, the leaves and stems are there to intercept it and lessen the impact of rain. That decreases the chance the soil will be lost with the runoff.

Annual wheatgrass root growth (shown on the left side of each column) cannot compete with better-established, more robust roots of a perennial variety, which may be the future of farming. The Land Institute

Farmers around the world are starting to experiment with perennial food crops — both grains, like wheat and sorghum, and legumes, like peas and beans.

But what took so long? If perennials are so great, why haven’t farmers bred them, up to now?

JG: The early plant breeders were farmers who were mostly focused on the first-year benefits of crops. And certainly they didn’t have the awareness of some of the damaging impacts of agriculture that we do now because they weren’t limited by land or resources. There wasn’t the tremendous population pressure that we face now.

Now we also have much better tools in plant breeding. We have much more powerful, faster computers that allow us to sift through the genetic material to determine which characteristics are going to be more productive. And we have the urgent need of increasing food productivity. It’s a perfect storm of opportunity and challenge, really.

Where should perennial crop research and development focus, at least in the near term?

JG: I recommend focusing first on the perennial types of legumes, given the protein needs of many of the developing countries. The great benefit is that legumes contribute to cropping systems; they can help take nitrogen out of the atmosphere and make it available in the soil. Also very promising and possibly in the near future would be perennial types of sorghum and rice. My agency, USAID, has awarded money to the University of Georgia to develop perennial sorghum.

Glover stands in a soil pit to compare exposed annual and perennial root growth at the Land Institute in Kansas in 2006. Jim Richardson/National Geographic Creative

You’re now mainly focused on encouraging farmers throughout Africa to plant perennial crops that will feed people while maintaining soil health. Is soil there in worse shape than in North America?

JG: African soils were in general less fertile and less well-suited for agricultural production than American soils from the beginning. Farmers in Africa are often faced by the big challenge of working with inherently old, highly weathered soil. By this point, their soils have also been heavily eroded. And so that’s where we need improvements most and most immediately.

Where have you seen perennial crops be successful?

JG: I recently visited a system in Malawi [in southeastern Africa] in which pigeon peas, which can be grown as either an annual or perennial crop, are actually grown together with soybeans, which are annuals. Once the soybeans and pigeon peas are harvested, the pigeon peas are allowed to regrow. When they’re regrowing, maize is planted into the pigeon peas. In the past, farmers would have grown just maize alone, or they might have rotated the maize with soybeans, but with this system they’re now getting two harvests of legumes in one season — the pigeon peas and the soybeans — and then in the second season they’re getting a harvest of maize and pigeon peas. So they’re really increasing the amount of protein they’re growing on their farm, and that’s valuable both in terms of the nutrition in the household, as well as valuable on the market. From my point of view as more of a soil scientist, it really adds a lot of benefits to soil, too.

What are some of the obstacles to getting more African farmers to grow perennials?

JG: Pigeon peas are already quite widely used, but mostly as annual crops. Their perennial benefits could be much more widely taken advantage of. The obstacle to the other crops being adopted is that there just hasn’t been enough plant breeding done to sufficiently improve perennial wheat and sorghum and test them in farmers’ fields.

Do you think that perennial crops could be valuable and useful in the developed world, too?

JG: I think ultimately they could be more productive than our annual grain crops because they are able to capture more sunlight, water and nutrients. But the urgency in developed countries isn’t there. The political will, the support by the farm community itself, probably isn’t quite as great.

[This article originally appeared in print as "Feed the World."]