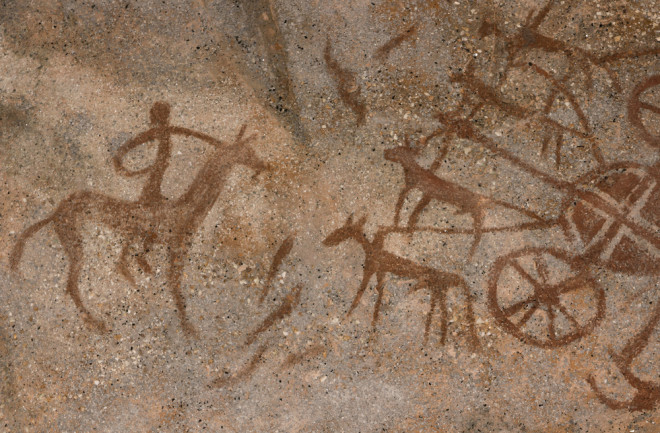 Climate change may be on everyone’s lips since the recent UN report, but don’t let that fool you. The shifts in climate we’re beginning to see are nothing new, as far as Earth — or our ancestors — are concerned.

But while all the talk nowadays focuses on how to change the course of the climate’s evolution, a study out today in the Proceedings of the National Academy of Sciences suggests shifts in ancient weather patterns may have affected our own species’ evolution.

Researchers had long theorized that climate change might have impacted hominin evolution, but the data was sparse. No good repository of data combined accurate weather data over time with fossil evidence and other archaeological data.

So, the team of geoscientists behind today’s paper went out and got that data. They took core samples from Lake Magadi in southwest Kenya, sampling layers so deep they go back over a million years. By analyzing their changes in geochemistry, mineralogy, pollen counts and more, the team can recreate the region’s climate, and its changes, over that time frame.

And best of all, the lake is just about 15 miles southwest of Kenya’s Olorgesailie site, home to numerous archaeological finds and its own million-year-old record. As the authors put it, “Lake Magadi is located in a region containing archeological and paleontological … sites that provide critical information about the relationships between climate dynamics and human prehistory.”

So, what did they find?

At the same time, the archaeological evidence shows our hominin ancestors were going through some changes too — what the authors call “a major transition in stone technologies.” The end of the earlier Acheulean style of primitive stone tools happened around 500 thousand years ago, right in that driest period, and the first artifacts of the later Middle Stone Age start appearing around 320 thousand years ago, after the second drier period began.

“The [earliest] dry phase and environmental variability would likely have had a significant impact on contemporary hominin populations regionally,” the authors write. Such a changing climate “can lead to an uneven distribution of resources that could drive hominins to travel more widely and to interact increasingly with other groups for both raw materials and information. In turn, this would help to drive technological change and its dissemination, resulting in increased foraging success rates and ability to survive.” The growing aridity may have also put evolutionary pressure on hominins who could perform greater cognitive tasks, such as traveling with a greater variety of tools over greater distances.

That first extra dry period also overlaps with a number of animal extinctions, in particular “large-bodied specialized grazing mammals.” The writers speculate that what may have done them in was not so much the aridity, which the animals were already used to, but the variability of the wet-dry spells, which they couldn’t adapt to.

With this finding, not only do we have a better picture of the kind of environment our hominin ancestors enjoyed, we also have more evidence of the kind of havoc a changing climate can wreak. You know, just in case we face anything similar in the future.