Did an "Alien Octopus" Destroy a British Wind Turbine? 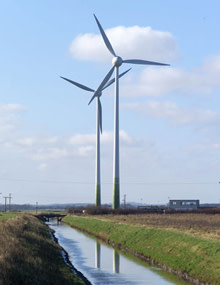 On the early morning of January 4th, something hit and mangled a giant 290-foot-tall wind turbine in Lincolnshire, England. One of its three 65-foot blades was completely severed while another was left dangling like a wilted flower petal. Officials have cordoned off the wind farm (which seems only to be fueling the UFO theories) but have not been able to identify what hit the turbine—or, at least, they're not willing to say. Some people in the area report seeing bright orange spheres of light "with tentacles" streaking across the sky towards the wind farm around the time of the crash. UFO flares? Actually, they were the celebratory fireworks from the 80th birthday party of local resident, reports the Guardian. Of course, UFO enthusiasts are having a ball with this one. But aside from a many-tentacled alien Don Quixote, other, slightly more rational suspects include a possible lightning strike, a meteorite, a robot stealth bomber on a test flight, a cow-sized ice chunk, or material failure. We're also going to throw in revenge of the bats. Ecotricity, the company that runs the wind farm, has sent the severed blade for forensic testing. Meanwhile, Ecotricity's founder, 47-year-old vegan motorbiker Dale Vince—aka Zero Carbonista—seems to be enjoying the publicity. Related Content: DISCOVER: Wind Turbine Shaped Like Flippers Could Increase Efficiency DISCOVER: High-Flying Windmills Blow Away Their Ground-Based Cousins 80beats: Bats' Lungs Burst When They Fly Close to Wind Turbines 80beats: Windmills on NYC Skyscrapers Sound Cool, but Wouldn't WorkImage: Ecotricity