Delay the Decay: How Zombie Biology Would Work 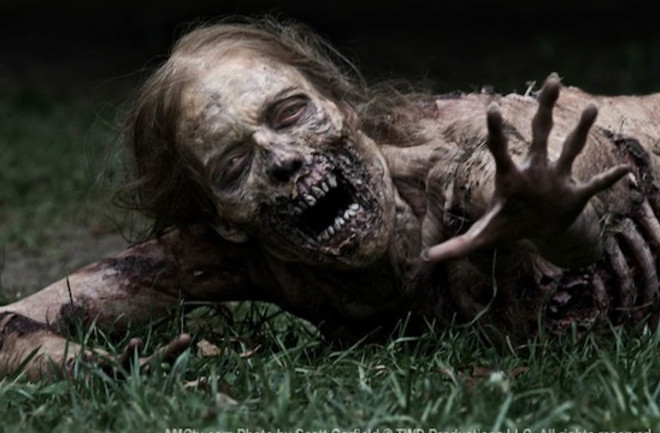 Delay the Decay: How Zombie Biology Would Work

Halloween is a-comin’ and this Sunday brings us AMC’s The Walking Dead. In honor of that, we’re discussing The Ethics of the Undead here at Science, Not Fiction. This is part II of IV. (Check out parts I, & III)

Before we can start investigating whether or not something that craves brains has a mind or should be pitied, we need to define just what, exactly, we’re talking about when we talk about zombies.

I’m going to start by ruling out the 28 Days Later zombies and the voodoo/demonic zombies of Evil Dead. First, the name of this blog is Science, not Fiction, which means any religious hokum is right out the door. Demon possession, souls back from Hell, and voodoo are not going to be considered in this investigation. On the other end of the spectrum, in 28 Days Later anything infected with “Rage” becomes a “fast” zombie. In essence, Rage is rabies only way, way scarier. Thus we aren’t dealing with the “undead” so much as the violently insane. So non-fatal pathogens don’t count either. If the pathogen doesn’t first kill you, then re-animate you, then you aren’t a zombie.

Which leads us to the next question: how does the pathogen work? I am not denying here the multitude of variations and nuances among zombie plague viruses, so we have to come up with a generic, realistic version to have our discussion. Zombies generally meet three important criteria. They are 1) stimulus-response creatures that seek flesh 2) continually decomposing and 3) contagious via bodily fluids. If we can explain, reasonably, how and for what reason a pathogen might cause/allow these conditions, we can describe a realistic zombie pathogen.

Condition 1, that zombies are stimulus-response creatures that seek flesh, implies that the pathogen must act to re-animate the existing neural pathways and motor functions in some fashion. Let us presume human-only infection and that the virus, being species specific, results in a cannibalism preference. Thus the sensory systems which are re-activated are capable of distinguishing four key things: flesh-vs-not-flesh; species; infected-vs-uninfected; self. Furthermore, for the sake of simplicity, the virus does not create any new systems, it merely hijacks existing ones.

Next, we have to remember that contracting the zombie pathogen is terminal. Whatever the hijacking process involves, we must presume that an intermediate stage of infection between contamination and zombification is fatal. If I had to guess, the infection of the medulla oblogata – where most automatic processes are regulated – is what results in cardio-pulmonary death, followed shortly by brain-death. Sometime after brain-death the medulla is fully hijacked by the zombie pathogen, jump-started (I won’t attempt an explanation) and re-animation is underway.

Whether it is musculature, perceptive organs, or circulatory and digestive systems, the virus must work with what it has. The metabolic process continues, arguably for both the body and the pathogen, which in large part informs the indiscriminate hunger for flesh. It is critical here to note that a zombie body is not uniquely strong (in fact, the opposite), nor can the body function properly without oxygen, waste disposal, and nutrients. We can, however, presume that a zombie body can, in its own way, marginally function when some of these requirements are missing. However, when an eyeball is gone or the intestines finally rupture, that zombie has lost whatever sense or function was associated with the now deteriorated organ: no healing happens.

Which leads us to Condition 2, that zombies are continually decomposing. No one thinks of a zombie as a healthy, mindless body; you think of a corpse that moves. The re-animation process is, we assume, imperfect or it would be revivification. One of the imperfections is that autolysis – the process wherein a cell’s own enzymes begin to consume it – is not stopped or reversed. As autolysis is the first step in postmortem decay, even a brief period between death and re-animation would cause it to start. Other aspects of decomposition, such as purification and insect infestation, though significantly slowed would likely continue as well.

Based on the average zombie, we can presume a few things about the virus’ relationship to decomposition. First, is that the zombie virus slows decomposition by providing cells with some nutrients. Second, is that the immune system, at least a crippled version, still functions to slow human bacterial flora from consuming their host. Third, it could be presumed that while some cell division continues, repairs and restoration are lost. Fourth, the virus would likely only preserve essential functions, allowing irrelevant parts of the body, such as skin, secondary musculature, and some organs to decay. Finally, we can presume the virus itself must consume flesh to some degree, rendering the zombie’s metabolic processes incredibly inefficient and explaining the insatiability of a zombie. Thus, a zombie frozen in the arctic would likely re-animate upon thaw (pathogen in stasis; corpse preserved) while a zombie at the bottom of the ocean would first suffocate (albeit more slowly) and then be crushed.

Condition 3, that the pathogen is contagious via bodily fluids only, is a critical detail in terms of both staying true to the mythology of zombies and for presenting a scenario in which not everyone would instantly be zombified. An airborne pathogen, particularly one with any sort of incubation period, would be total, unstoppable pandemic. But, more importantly, we are dealing with a creature of fiction. And, just as with other members of the undead (e.g. vampires, werewolves) the bite gets in the blood and turns you

Remember, we almost never see someone getting bitten by a zombie and then not dying and “coming back.” The reason is that a bite both by-passes traditional levels of the immune system and delivers a huge dose of the pathogen directly into the circulatory system. Furthermore, it immediately contaminates the flesh directly exposed. As the zombie pathogen, whatever it is, seems able to interact with most cell types, not just specific ones (as with HIV), it would make sense that direct exposure would allow the virus both permeate the whole system (body) while beginning total infection at the site of contamination as well. It only takes one bite!

There you have it. A zombie pathogen must 1) be transmitted via bodily-fluids to 2) ensure sufficient and total infection which 3) is always fatal due to the fact that pathogen must 4) either consume the host or host-acquired flesh 5) hijack all the necessary functions for movement and sensation 6) provide at least some nutrients to itself and the body 7) allow continued movement and 8.) slow the decomposition of the host body.