Dead Zone the Size of Connecticut Blossoms in Gulf of Mexico 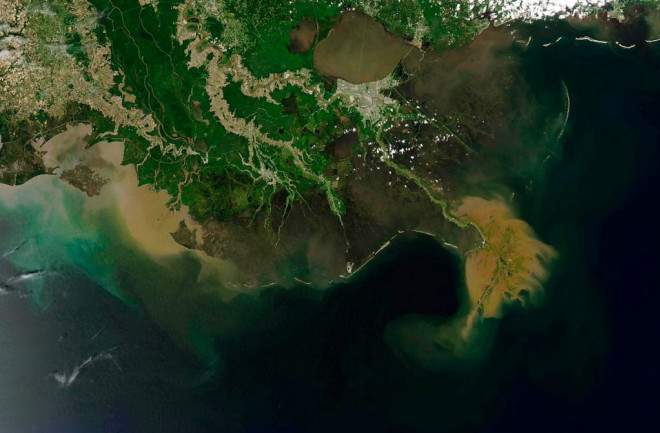 Sediments and nutrients darken the waters of the Gulf of Mexico from the Mississippi River and its distributaries, as seen in this image captured by NASA's Aqua satellite on May 6, 2013. (Image: NASA) This summer's "dead zone" in the Gulf of Mexico measures some 5,840 square miles, or roughly the size of Connecticut, according to the National Oceanic and Atmospheric Administration. A dead zone is an area where oxygen levels in the water drop so low that most forms of life cannot survive. Thanks to huge amounts of nutrients coursing down the Mississippi River from America's agricultural heartland, formation of a dead zone along the Louisiana coast has become an annual occurrence, threatening commercial and recreational fisheries valued in 2011 at $818 million.

This map shows the extent of low oxygen in the Gulf of Mexico along the Louisiana coast this summer. (Source: LUMCON/Rabalais) A wet spring that brought more runoff of fertilizer from farmlands was projected to trigger formation of a larger than average dead zone this summer. But windy conditions in the Gulf of Mexico churned and oxygenated the waters, limiting its size to only slightly above average. Even so, it's more than 3,000 square miles larger than the goal being pursued by a task force consisting of federal and state agencies and Indian tribes. And while American farmers have become more efficient in their use of fertilizer, "we don’t see less in the way of nutrients coming out at the end of the Mississippi, and we still have dead zones," says Alan Townsend, a scientist at the University of Colorado who conducts research on the cycling of nitrogen, a key nutrient, on global and regional scales. For more of Townsend's perspective, keep reading. But first, how do dead zones form? The image at the top of this post, captured by NASA's Aqua satellite on May 6th, helps illustrate the process. Two big plumes of sediment are visible. Toward the right edge of the picture, one is emptying into the Gulf from the main branch of the Mississippi. To the left another plume is coming from the Atchafalaya River, a distributary of the Mississippi. The whole Mississippi system dumps some 230 million tons of sediment from farm fields and other sources into the Gulf every year, according to the U.S. Geological Survey. These sediments are accompanied by nitrogen, phosphorous and other nutrients — 1.7 million tons of the stuff, ultimately from from fertilizer, treated sewage from cities, and other sources. When the nutrients hit the Gulf, they stimulate blooms of algae in the water. And when these tiny, photosynthesizing organisms die, they sink toward the bottom and decompose — a process that sucks so much oxygen out of the water that there is too little to support life. Thus the name "dead zone." For more detailed information on the formation and impacts of dead zones, check out this explainer from the Mississippi River Gulf of Mexico Watershed Nutrient Task Force. Some progress has been made in mitigating the flow of nutrients off farm fields, according to Townsend. (Full disclosure: He is a colleague of mine at the University of Colorado.) American farmers used to over-apply fertilizers as an insurance policy. But now, driven in part by economics — using too much fertilizer is simply a waste of money — "they are using less fertilizer in the heartland. They have become much more efficient," he says. Why does a dead zone still form in the Gulf every summer despite these efforts? It's not entirely clear, Townsend says. It may be partly due to a lag effect — it takes awhile for excess nutrients to be flushed all the way out of the system. Another factor may be increased production of corn, with its attendant use of fertilizer, to produce ethanol as a biofuel. Townsend also points out that less than 1 percent of the U.S. corn crop now winds up on our plates as corn. The overwhelming majority goes to animal feed. So-called concentrated animal feeding operations, or CAFOs, where large numbers of cattle are fattened on corn and other grains, produce huge quantities of waste loaded with nutrients, which can run off into streams and rivers. "So in some ways you’ve just outsourced the problem from the field to the feedlot," Townsend says. Dead zones are by no means limited to the Louisiana coast:

Dead zones worldwide. (Source: EPA, from "Spreading Dead Zones and Consequences for Marine Ecosystems," Diaz and Rosenberg, Science, 2008 ) As of 2008, researchers had identified more than 400 dead zones around the world, covering almost 95,000 square miles. One country to watch: China. "They are using fertilizer at a rate that has never been seen before,” Townsend says. “They’ve done an unbelievable job in creating astounding yields, but they’ve done it on the back of an incredibly inefficient system.” Of course this also means that Chinese farmers could save money by becoming much more efficient, just as American farmers have done. In other words, the problem is amenable at least in part to a solution that would be a win/win for farmers, fishermen, and aquatic ecosystems.