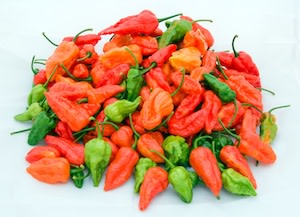 In 2007, the bhut jolokia, 100 times hotter than the average jalapeño, made it into the Guinness Book of World Records as the world’s hottest chili…only to be dethroned in the book's latest edition by the Trinidad Scorpion Butch T

. Although the bhut jolokia has lost its world-record title, it's recently found a more practical role: alleviating poverty in its home province of Assam. At The Guardian, Helen Pidd describes

how bhut jolokia, also known as the ghost chili, became a lucrative crop for impoverished Assamese farmers when its world-record status drove fans of spicy foods to offer enormous sums for the fiery chili.

The Assamese government wanted in. Farmers were offered subsidies to cultivate the plant, with some famous tea gardens in upper Assam even getting in on the act. Trinity [a non-governmental organization] has selected another 2,000 Assamese farmers to grow the crop, said Nagen Talukdar, Trinity's secretary, last week. There is serious money to be made for anyone with the wherewithal to preserve their crops – a kilo of dried bhut jolokia sells for about 1,800 rupees [$32.45], a fortune for the average farmer, who generally survives on a subsistence level, taking home 150 rupees [$2.70] a day.

But there are only so many people hoping to sear their taste buds into oblivion. Much of the demand for Assam’s ghost chili comes not from thrill-seekers, but from the Indian defense ministry. Capsaicin

, the component of chilies that gives them their fiery feel, can be extracted from bhut jolokia and transformed into chili grenades capable of dispersing rioters and repelling elephants

. If you’ve got a burning desire to know more, check out the story at The Guardian