Cows Burp Out Tons of Methane. Feeding Them Seaweed Could Help

Adding seaweed to cows’ diet would help tamp down their methane emissions. 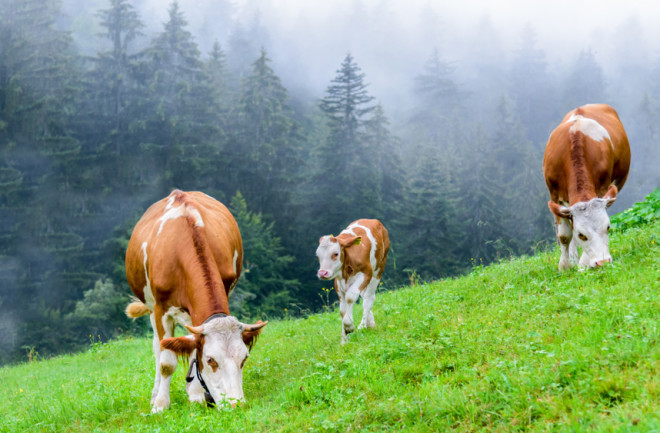 Every morning, Breanna Roque goes out to the barn to feed the cows. But this isn’t your typical farm — in fact, it’s a laboratory. The University of California, Davis graduate researcher spends her time among bovines, tweaking their diets so that they burp less. Why? Less burps means less methane. And less methane, on a global scale, could mean slowing down climate change.

Roque is part of a team feeding cows a special diet, one that includes small portions of a sticky, red seaweed called Asparagopsis. It’s not the typical fare for the grass-happy bovines, but the seaweed-infused feed serves a specific purpose — keeping the cows’ prodigious methane production in check.

Yes, cow burps, (not farts, as often believed), release a considerable amount of methane into the atmosphere. The EPA estimates that cows and other ruminating animals, like cows and sheep, produce an estimated one third of U.S. agricultural methane emissions. And although agriculture accounts for a smaller percentage of greenhouse gas production than other sectors like transportation and energy, it produces more methane, which warms the Earth up to 84 times faster than CO2.

“People have been looking for a way to reduce methane for quite some time,” Roque says. It turns out seaweed, particularly in the genus Asparagopsis, can help ruminating animals produce less gas. Curbing animal burps is something researchers around the globe have tried to tackle in different capacities. They’ve proposed feed additives, as well as more far-fetched solutions, like an anti-methane vaccine.

But Roque is part of the first team to test the belch-quenching power of Asparagopsis in actual cows, according to UC Davis ecologist and lead researcher Ermias Kebreab. Prior studies demonstrated that the seaweed could reduce methane production by up to 99 percent in artificial stomachs, but questions remained about the seaweed’s effectiveness in the real world. Roque and Kebreab are providing some of the first real answers.

Look to the Cows

You’ve probably heard that cows have four stomachs, which is half true – their stomachs are divided into four chambers, the first being the rumen. When they swallow, cows repeatedly burp food back up, chew it as cud, and swallow it again until it’s reached the proper mushy consistency. But during that process, which cows repeat dozens of times throughout the day, the digestive process produces methane as a byproduct.

Roque’s team at UC Davis wasn’t the first to test the idea that adding substances to animals’ feed might help reduce their burps. In fact, it’s a question scientists across the globe have been pursuing.

In 2011, a team in Iran tested the effects of garlic oil, turmeric powder and an additive commonly used in feeds called Monensin on sheep’s methane production. They found that all three had just mild effects in aiding digestion, meaning it did little to reduce methane production. Following suit, a team in Denmark announced in 2016 that they would look into the impacts of oregano on reducing methane emissions from cow burps as well, hoping to see them decrease by as much as 25 percent. No results from that study have been published yet.

The UC Davis team has conducted two studies, with a third on the way. The first one, which replicated former tests in artificial cow stomachs, found that when seaweed made up just five percent of cows’ normal hay feed, methane production decreased by 95 percent.

But the results were even more promising when the team tested Asparagopsis armata in the diets of lactating dairy cows. They reduced the amount of seaweed content in the cows’ feed to either .5 or one percent. Cows eating a diet with .5 percent seaweed saw a 26 percent decrease in methane, while those with a one percent diet produced 67 percent less methane.

“To me, that means that the seaweed works in an animal better than it worked in a lab,” Roque says. “You don’t see that often.”

But how does it work? Roque says the seaweed contains a compound called bromoform, which inhibits the creation of an enzyme that produces methane during digestion in cows. Still, further research is needed to fully understand why this seaweed works best.

Now, the team is testing the seaweed diet in beef steer, to see if they get results comparable to dairy cows. Roque says the team also has yet to test if adding seaweed to cows’ diets will affect the taste or quality of the animal products we normally get from cows. In the future, they’ll run trials to see if seaweed gives cow’s milk a funky flavor, or leaves steaks redolent of seafood.

Simply adding a bit of seaweed to cow food sounds like an ideal climate solution. But some scientists are skeptical of how effective it would actually be.

In order for the seaweed to have a real benefit in reducing emissions, species of Asparagopsis would need to be produced on a global scale. It’s a challenge that divides scientists.

At the annual American Dairy Science Association meeting in June, two researchers from University of Pennsylvania argued that mass production of seaweed might not be a realistic solution to climate change. Despite the seaweed’s potency, they say animal agriculture contributes just five percent of greenhouse gas production in the U.S. The majority comes from the transportation and energy sectors — places where adding seaweed is far less likely to be a solution. Plus, burp-curbing compounds in seaweed are sensitive to heat and light and may lose their effects over time. And on top of it all, the long-term effects on animal health haven’t yet been evaluated.

But many are still eager to see the seaweed in action. Roque says her research has garnered interest from outside groups who want her help to mass-produce the seaweed for global animal consumption.

“I have people reach out to me all the time,” she says. “Unfortunately I am an animal biologist and not a marine biologist.”

And just last month, researchers at the University of the Sunshine Coast in Queensland, Australia announced they would be trying to find ways to farm the seaweed on a large enough scale to add to livestock feed in the real world.

Though the introduction of seaweed into cow diets won’t fix all our climate change woes, Roque still thinks the efforts are worthwhile.

Editor’s note 11/1/19: This story has been updated to include the correct species of seaweed researchers tested in lactating dairy cows.