Could Turning the Oceans Into a Giant Bubble Bath Cool the Planet? 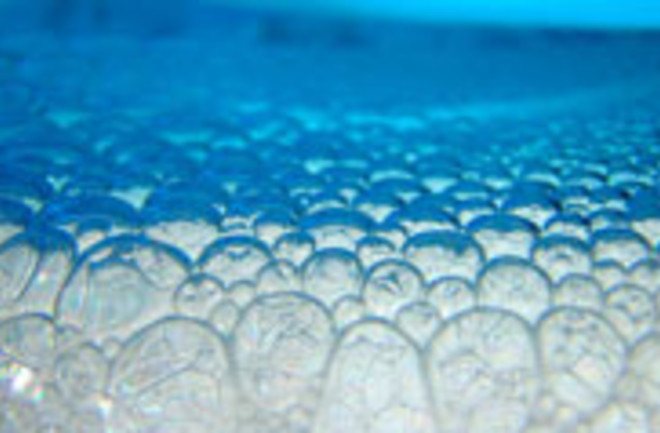 As heated global warming debates continue, scientists are also investigating ways to get our planet to cool off if the politicians can't figure out how to reduce greenhouse gas emissions. The latest geoengineering scheme involves turning the world’s oceans into a giant bubble bath, with hundreds of millions of tiny bubbles pumped into the seas. This would increase the water's reflectivity and bring down ocean temperatures, according to Harvard University physicist Russell Seitz. As the creative physicist said to the assembled crowd at an international meeting on geoengineering research: “Since water covers most of the earth, don’t dim the sun.... Brighten the water.” Seitz explained that micro-bubbles already occur naturally, with bubbles under the ocean's surface reflecting sunlight back into space and mildly brightening the planet. What Seitz imagines doing now is artificially pumping many more bubbles into the sea. These additional micro-bubbles would each be one five-hundredth of a millimeter and would essentially serve as “mirrors made of air.”

The scientists say they could be created off boats by using devices that mix water supercharged with compressed air into swirling jets of water. “I’m emulating a natural ocean phenomenon and amplifying it just by changing the physics—the ingredients remain the same" [ScienceNOW],

Seitz said. Using a computer model that simulated how air, light, and water interacted, Seitz found that the micro-bubbles could have a profound cooling effect on our planet--suggesting that temperatures could cool as much as 5.4 degrees Fahrenheit.

Along with the reflectivity of the added bubbles, previously published reports show that they may improve fuel efficiency of cargo ships, allowing them to virtually float on air [Treehugger].

Seitz has submitted a paper on the concept he calls “Bright Water" to the journal Climatic Change [ScienceNOW].

While Seitz is excited at the possibility of creating "bubble patches" to reduce the effects of global warming, it still needs to be seen what sort of infrastructure would be required to create these giant bubble baths. And as with all geoengineering schemes, there's that pesky question of whether hacking planet-wide systems will have any pesky side effects. Related Content: 80beats: Study: Climate Hacking Scheme Could Load the Ocean With Neurotoxins 80beats: With $4.5M of Pocket Change, Bill Gates Funds Geoengineering Research 80beats: If We Can’t Stop Emitting CO2, What’s Our Plan B? 80beats: Fighting Global Warming: Artificial Trees and Slime-Covered Buildings DISCOVER: 5 Most Radical Ways to Squelch a Climate Crisis (slide show) Image:Flickr/gog1_1gog