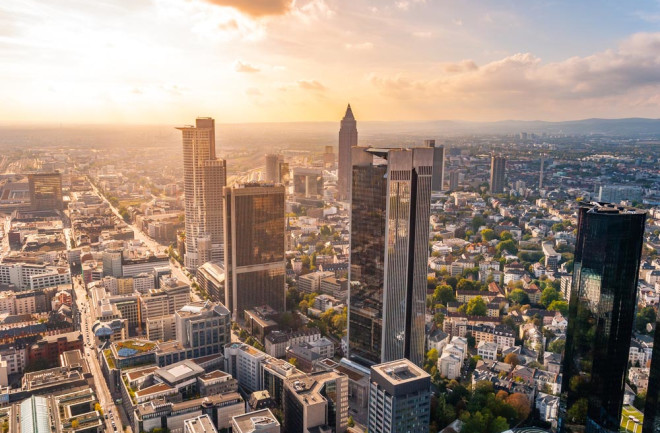 The researchers studied how much fuel could be generated by installing a proposed new type of air conditioner at a landmark office building in downtown Frankfurt, Germany. (Credit: Bildgigant/shutterstock) In the hot and sticky suffocation of summer, air conditioners are a breezy balm. And as climate change heats Earth, the need for them is only rising. Yet the cold air blowers consume a ton of energy. But now researchers say they have a solution for these energy hogs that actually helps the climate. In a new analysis, scientists argue for using air conditioning units to capture carbon dioxide straight from the atmosphere and transform it into fuel. The idea is that these renewable-energy powered devices would lower atmospheric CO2 and provide a scalable alternative to oil, natural gas and other fossil fuels.

The conversion tech would first take in CO2 and water from the air. Then, an electric current would split the water into hydrogen and oxygen. Finally, combining the hydrogen with the captured CO2 would produce hydrocarbon fuel. It's all theoretical for now, but the technology for each step of the process already exists. Companies like Climeworks in Switzerland, Siemens AG in Germany and Green Energy in the US, have commercialized technologies that separately capture CO2 directly from the air, isolate hydrogen from water and produce fuels. But a complete system that puts all of the pieces together, is lacking. The fact that the components are available, however, means “it would be not that difficult technically to add a CO2 capture functionality to an A/C system,” the authors write.

If air conditioners were equipped with the appropriate technologies, the researchers calculate Fair Tower, a landmark office building in downtown Frankfurt am Main in Germany, could produce 550 to 1,100 pounds of liquid hydrocarbon fuels every hour, or about 2,200 to 44,00 tons per year. When the researchers extrapolated on this calculation they found the five cities in Germany with the largest office space could together produce 2.6 to 5.3 million tons of fuel each year, the team reports Tuesday in the journal Nature Communications. The authors computed similar estimates for grocery stores from the three biggest supermarket chains in Germany and a neighborhood of apartment buildings. They found grocery stores could capture 386 tons of CO2 per year and convert it to 3.3 tons of hydrocarbon fuels or about 8 percent of Germany’s total consumption of diesel. When the researchers applied their estimates to apartment buildings, they discovered the smaller buildings still made an impact. A five to six-apartment building could capture about a pound of CO2 per hour and convert it to around 9 to 11 pounds of fuel per day. The authors acknowledge the numbers represent a single, highly industrialized country and are mainly for illustration. However, they write the preliminary analysis demonstrates the potential for air conditioners to capture CO2 from the air and make substantial and relevant amounts of hydrocarbon fuels.