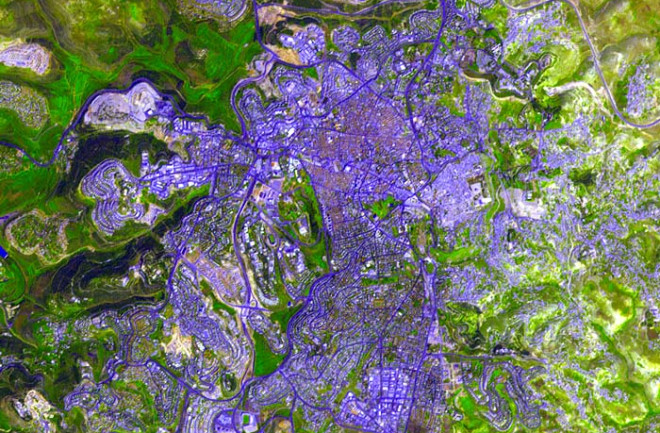 As President Obama lands in Israel, a beautiful satellite image of Jerusalem frames the geography of contested ground. The city is seen here in an image from the ASTER instrument on NASA's Terra satellite. (Image: NASA/GSFC/METI/Japan Space Systems; U.S./Japan ASTER Science Team) For the first time in his presidency, President Obama has traveled to Israel, landing in the Holy Land today for what the New York Times calls "a richly symbolic state visit, bearing a message of solidarity to a wary Israeli public, and a promise to defend Israel from threats near and far." During his time in Israel, the president will be visiting Jerusalem to address young Israelis at the International Convention Center. The city is, of course, richly historic — the source of Judaism, Christianity and Islam. And also highly contested. Recently, tensions betweens Israel and the Palestinians intensified as the Israeli government stepped up planning for a project known as E-1. It will include new housing for 3,000 Israelis between East Jerusalem, which Palestinians seek as their capital, and a large Israeli settlement in the West Bank called Maaleh Adumim. With President Obama's visit to Israel, and the controversy that simmers in the background, I thought I would look for a compelling remote sensing image of the city of Jerusalem. You can see the result of my search at the top of this post. It's an image from the ASTER instrument aboard NASA's Terra satellite, acquired on April 3, 2000. The data were processed to render vegetation and the city's many tile roofs in relatively natural tones. The Old City is the lighter blue area in the right center of the image, surrounded by a 400-year-old wall built by the Ottoman Turks. The Dome of the Rock and the Al Aksa Mosque are visible on the eastern side of the Old City. The E-1 settlement will be constructed to the northeast, off the upper right quadrant of this image.