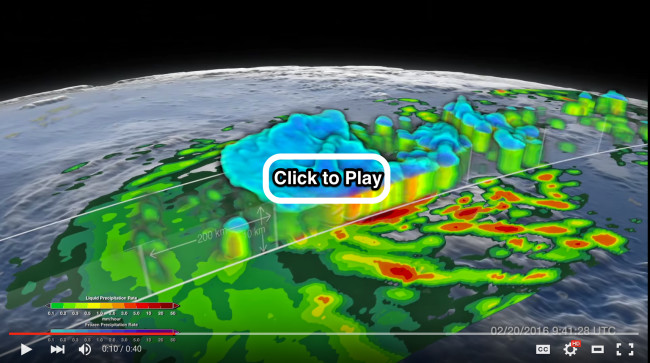 Visualization of precipitation from Tropical Cyclone Winston as it made landfall on Viti Levu, the largest and most populated island in Fiji, on Feb. 20, 2016. The data come from the Core Observatory satellite of the Global Precipitation Measurement mission, or GPM. (Click to watch the animation on Youtube. Source: NASA Goddard) It has been 10 days since Tropical Cyclone Winston tore into Fiji as a Category 5 storm — and now the full toll of the devastation is coming to light.

Weather Underground is reporting today that the death toll from Winston has reached at least 42 people, which makes it the deadliest storm on record in Fiji. Moreover, with homes and businesses wiped out, Winston caused at least at least $468 million in damage, also a record — and a staggering 10 percent of Fiji's gross domestic product. Given this news today, I thought I'd share two dramatic remote sensing animations showing Winston just as it was approaching and then plowing into Fiji's main island of Viti Levu. The animation above is based on data acquired by the Core Observatory satellite of the Global Precipitation Measurement mission. The satellite, which is co-managed by NASA and the Japan Aerospace Exploration Agency, measures rainfall using both passive microwave and radar instruments. It was passing directly overhead on Feb. 20, and so accurate measurements of Winston's prodigious rainfall were possible. The instruments found that in addition to powerful winds topping 200 miles per hour, Winston was dropping rain at an astonishing rate of more than 6.7 inches per hour in the western side of the eye. 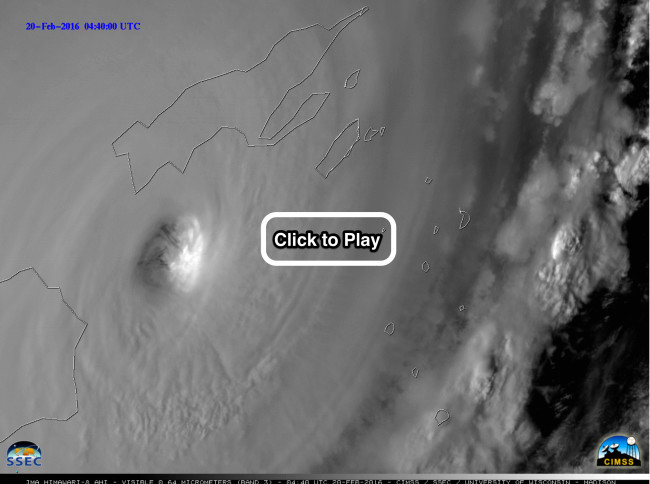 Animation of Himawari-8 images as the storm approached the largest Fijian islands of Vanua Levu and Viti Levu btween Feb. 19 and 20, 2016. (Source: Cooperative Institute for Meteorological Satellite Studies) The animation above shows what Winston looked like to the Japan Meteorological Agency's Himawari-8 satellite as it approached Fiji. It starts with the cyclone making a direct hit on an island I believe is Vanua Balavu. It then wobbles a bit, skirts just south of Vanua Levu and then heads toward the north shore of Viti Levu. The animation, created by the Cooperative Institute for Meteorological Satellite Studies, reveals the presence of mesovortices — swirls of low clouds which are typically 2 to 20 kilometers across — within the large and well-defined eye of the Category 5 storm. Weather Underground has a great explainer of these intriguing features, along with an animation showing them within the eye of Super Typhoon Haiyan as it was churning toward the Philippine Islands on Nov. 7, 2013. You can check it out here.