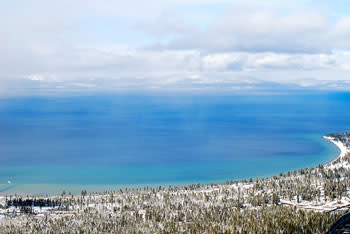 More than seventy years ago, commercial fishing in Lake Tahoe

was outlawed. The deep, clear lake in the Sierra Nevada had been denuded of its Lahontan cutthroat trout

, and state officials have since only allowed recreational fishing. Now, with interest in eating invasive species on the rise

, and with millions of invasive crayfish muddying the lakewaters, commercial fishing of the crustaceans has been instated on Tahoe's Nevada side. The New York Times has a reporter on the scene, who records the giddiness in the local seafood industry:

In Nevada, made up mostly of desert, the impending availability of a local seafood has made headlines in Reno, less than an hour’s drive northeast. Sierra Gold Seafood, a wholesaler that will sell [a fisherman's] crayfish, trucks in all its products from hundreds of miles away — everything except the Lake Tahoe crayfish now. “This is it, man,” said Brandon Crowell, whose family owns Sierra Gold, adding that 40 restaurants and casinos in the Reno area had already put in orders.

"Keep Tahoe Blue" bumperstickers have been adorning Northern California cars for decades, but it has been an uphill battle against pollution and runoff. The alpine lake is ringed with ski resorts, beaches, and condominiums. Putting a dent in the numbers of crayfish, whose excretions can cloud the shallow water at the edges of the lake, may help, but there's plenty more work left to do. Read more at The New York Times