Come Hell or Supervolcano, Humanity Will Be Alright 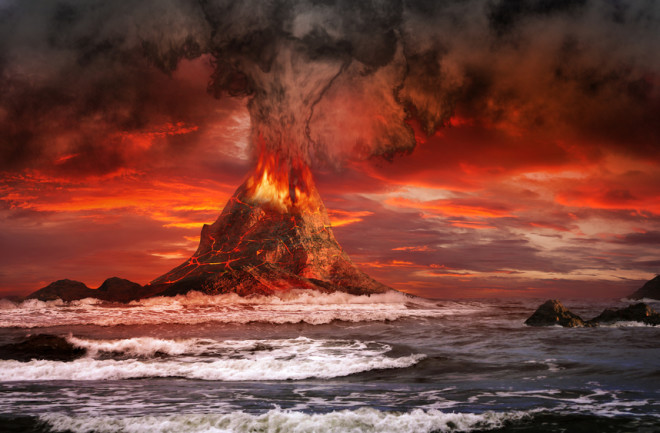 Every year or so, a fresh rash of concern about the Yellowstone supervolcano spreads across the internet. While the likelihood of an eruption there remains remote, if the caldera were to blow, it could be devastating. Previous eruptions there covered much of North America in choking ash, and likely caused sharp drops in temperature that would decimate crops today.

Living through a supervolcano eruption certainly qualifies as a doomsday scenario. But, humanity might fare better than we think. After all, we’ve already survived one. So, before you purchase a $6,000 pallet of bunker-ready foodstuffs from Costco, read this.

The eruption of Toba, in Indonesia, some 74,000 years ago was immense. The event spewed an estimated 720 cubic miles of rock, ash and magma into the air, and debris has turned up in India, the Arabian Sea and the South China Sea, sometimes more than 1,000 miles away. The ash from the event alone would have been deadly to life nearby, and the sulfur dioxide emitted could have had a powerful temporary cooling effect on the atmosphere. For comparison, the eruption of Mt. Tambora in 1815, much smaller than Toba, led to the “Year Without A Summer,” an especially chilly year that caused crop failures and famine in Europe.

The magnitude of the eruption has led some scientists to theorize that ancient humans may have made it through the event only by the skin of their ancient teeth. They propose that humans living at that time experienced a “population bottleneck,” an event that wipes out nearly all of the living members of a species. Traces of these near-extinction events show up even thousands of years later in our DNA.

It’s a tempting theory, but one that has been called into question multiple times by more recent research. A study of two archaeological sites in South Africa adds even more evidence that the Toba eruption may not have been as devastating to our ancestors as we thought — the inhabitants of these sites made it through just fine, says an international team of researchers.

They dug through layers of sediment at each site, unearthing a thin band of cryptotephra — microscopic fragments of glassy rock — at each that they were able to match to the Toba eruption with a chemical analysis. Time in archaeology is measured in layers of sediment, and by comparing the dirt from around the eruption to layers both before and after the eruption, they got an idea of how it affected the people living at the sites.

The consensus? Not much changed, they say in a paper published Monday in Nature. Human activities at the two sites, one in a cave and another out in the open, continued at roughly the same level before, during and after the eruption. By all indications, the early South Africans carried on relatively unperturbed by the volcanic cataclysm half a world away.

The findings line up with other research hinting that huge eruptions may not have been the doomsday scenario we imagine. A study published in February led by researchers from the University of Arizona looked at plant remains from Lake Malawi in eastern Africa. They found no evidence of die-offs either, though they did see indications that the climate got slightly drier immediately after the eruption.

Though it’s likely that Toba did indeed cause noticeable changes to the environment, based just on the sheer scale of the eruption, it probably wasn’t enough to nearly wipe humanity from the face of the Earth. Our ancestors proved to be a bit hardier than we assumed.

An obvious variable in favor of the South African hominins was of course their distance from the eruption. Their dwelling place lies over 5,500 miles from Toba, far enough that they may have been spared the brunt of the fallout. Ancient humans in closer proximity might not have fared so well. Of course, given the currently chaotic nature of the timeline of human dispersal around and out of Africa, it’s difficult to know how many and what kind of hominins might have been nearer to the volcano at that time. But, it is clear that humans had left Africa by then and likely dispersed to landmasses near Toba.

What became of them after the eruption is anyone’s guess.