In 2014, the Lake Powell reservoir will release less water than any year since it was built. 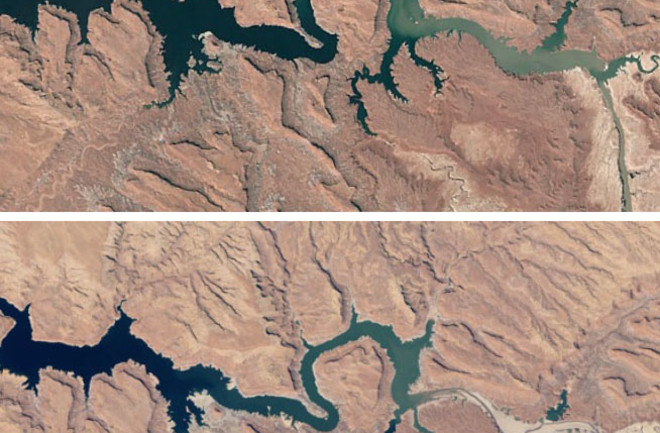 Lake Powell, along the Colorado River, has seen significant water loss over the past decade. From April 20, 2000 (top), to April 26, 2013, reservoir levels have dipped as drought persists. | NASA Earth Observatory

Extreme drought in the Colorado River Basin last summer forced the federal Bureau of Reclamation, which manages river flows in the Western U.S., to make a historic announcement: For the 2014 water year (October 2013 through September 2014), the agency will reduce releases of water from Lake Powell — the gargantuan reservoir on the Colorado River that parts of Wyoming, Colorado, New Mexico and Utah rely on for water — by more than 750,000 acre-feet. (An acre-foot is roughly the amount of water an American household uses in a year.) That’s the lowest release level since the reservoir began to fill in the 1960s.

Since 1999, Colorado River Basin flows have been among the lowest in more than 1,200 years. As of late September, the river’s major reservoirs were, on average, at half-capacity. That means downstream water users in Southern California, Arizona and elsewhere could be headed for serious trouble in coming years if the drought continues.

The Bureau of Reclamation will revisit the situation in August, after the spring and summer runoff from mountain snowpack has found its way into the reservoirs. Until then, says agency public affairs officer Lisa Iams, “We are keeping our fingers crossed that this winter is wetter than average.”

[This article originally appeared in print as "Colorado River in Drought's Grip."]