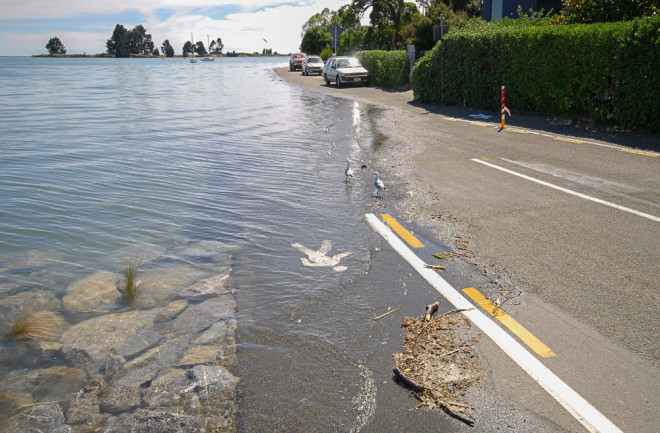 In a recent study, researchers examined 99 coastal cities and found nearly all of them were rapidly sinking. The study showed development and groundwater depletion has been depressing the surface. In many of these coastal communities, subsiding land may create a compounding risk of flooding, adding to the rising sea levels due to global warming.

“Anywhere you are worried about sea level rise, you should also be worried about subsidence,” says study author Matt Wei, a University of Rhode Island associate professor of oceanography.

Although subsidence, a fancy word for sinking ground, is more prevalent in East Asia, Wei and his colleagues also observed it in the U.S., Africa, Europe and Australia. In short, it is a global phenomenon with global implications. In many places, research like Wei’s could help prevent disastrous consequences during natural disasters.

U.S. Geological Survey employee Richard Ireland took a photograph in San Joaquin Valley, Cali. in 1977 of a local farmer standing beside a telephone pole. A sign that read, “1925” in bold print was nailed to the pole at two-thirds height. In the 52 years preceding the photograph, the ground below the farmer's feet had sunk nearly 30 feet.

Booming agriculture — grapes, nut and citrus farms — depleted a subterranean aquifer system below the valley floor. As the aquifer collapsed, the ground sank and the underground water-holding capacity of the area was permanently diminished.

In recent decades, the valley has developed systems to closely monitor subsidence. Extensometers and a GPS network watch out for signs of further aquifer compaction. The network might soon prove a useful model far beyond the bucolic Californian farmlands.

“A lot of U.S. and European countries have plans where they look at flood risks for different scenarios of sea level rise,” Wei says. “Rarely do they take into account subsidence in their models.”

Making this shift will require collaboration between municipalities and scientists. Since the phenomenon is rarely uniform, cities can’t use the same subsidence models. Certain areas may sink while others rise within a city, or even a neighborhood.

In an attempt to map out at-risk locations, Wei and his colleagues identified areas that sit below 10 meters above sea level and are experiencing subsidence at an equal or greater rate to sea level rise. In other words, low-lying coastal zones that are sinking faster than the water is rising.

Of 99 cities, all but six contain these danger zones and some have many. Shanghai, China and Hanoi, Vietnam top the list, each with more than 1,000 square kilometers of at-risk real estate. The U.S. cities of Hampton, Va., Tampa, Fla. and Corpus Christie, Texas break the top 10 as well.

Similar to the San Joaquin valley, researchers think the leading cause for subsidence worldwide is groundwater depletion. But water alone doesn’t offer a satisfactory explanation. Large construction projects tend to compact the soil beneath them, and also pump out large quantities of water to support their operations. Oil and gas extraction can contribute as well. The process can weaken underground structures and cause the ground to sink rapidly.

Wei hopes that his research will motivate municipalities to pay attention to subsidence. Once a city knows where subsidence is happening, they can take inventory of the area, assess the flood risk and take measures to protect it.

“First you have to be aware that it is happening, then you need resources to improve it,” Wei says.

GPS stations are an important tool. While much of Wei’s research relied on satellite images, GPS data is more accurate. But, even in the U.S., cities rarely contain more than a handful of GPS stations. Long-term monitoring of subsidence risks will require governments to invest in on-the-ground technology.

As cities around the world grow and expand, so does our understanding of their unintended consequences. Wei’s research provides insight into how one of these consequences may collide with the global effects of climate change to create a unique problem. But it is also a reminder of something more. That disaster mitigation, on both global and local scales, is done best through careful observation and anticipation.