CO2 in the Atmosphere Climbs to Highest Level in 4.5 Million Years

The last time the CO2 concentration was at this level, seas were almost 80 feet higher than today. 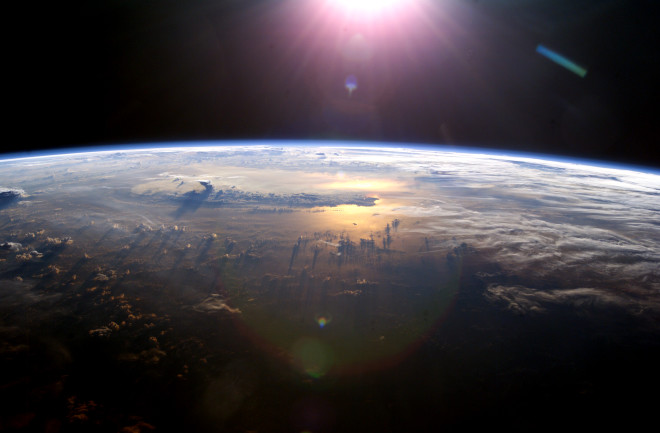 A view from the International Space Station in 2003 highlights just how thin our atmosphere really is. (Credit: NASA)

Carbon dioxide in our atmosphere reached it's annual peak in May, topping out at the highest level ever directly measured since modern observations began 63 years ago.

That level, as measured atop Mauna Loa in Hawaii, reached a monthly average of 419 parts per million, scientists from NOAA and the Scripps Institution of Oceanography have announced.

Using indirect methods for determining levels of CO2 going back millions of years, scientists estimate that this is the highest concentration since a period known as the Pliocene Climatic Optimum, between 4.1 million and 4.5 million years ago. At that time, the globe's average temperature was roughly 7 degrees Fahrenheit higher than in pre-industrial times, and sea level was about 78 feet higher than today.

Even 'just' 10 feet of sea level rise would cause severe challenges in coastal areas around the world. To offer one example, most of Florida south of about Fort Lauderdale would be submerged.

A Mountain of Carbon

“We are adding roughly 40 billion metric tons of CO2 pollution to the atmosphere per year,” said Pieter Tans, a senior scientist with NOAA’s Global Monitoring Laboratory, quoted in a NOAA news release. “That is a mountain of carbon that we dig up out of the Earth, burn, and release into the atmosphere as CO2 — year after year. If we want to avoid catastrophic climate change, the highest priority must be to reduce CO2 pollution to zero at the earliest possible date.”

In 2019 — before the global coronavirus pandemic slowed economic growth — the world actually managed, just barely, to flatten the curve of emissions of CO2 into the atmosphere. That year, we humans emitted no more CO2 from burning of fossil fuels and other activities than we did the year before. It was a notable achievement attributable in large measure to closures of coal-burning power plants and rapid growth in the use of renewable energy.

In 2020, global CO2 emissions actually dropped by 6.4 percent, or 2.3 billion tons, thanks to COVID but also to continuing gains in use of renewable energy. Now, however, emissions are rising again.

The annual up and down cycle of CO2 levels in the atmosphere over the past five years, plus the long-term upward trend, is seen in this graph based on measurements taken at the Mauna Loa Observatory in Hawaii. The red lines show the monthly mean values, centered on the middle of each month. The black lines show the same after correction for the average seasonal cycle. CO2 peaks each May, just before plant growth in the Northern Hemisphere starts drawing the gas out of the atmosphere. (Source: NOAA)

Through it all, the atmosphere has barely noticed. According to NOAA, any impact on atmospheric CO2 stemming from last year's drop in emissions just was not discernable against the background of natural variability in CO2 levels caused by how plants and soils respond to weather, soil moisture, and other conditions.

"We ultimately need cuts that are much larger and sustained longer than the COVID-related shutdowns of 2020," said geochemist Ralph Keeling, who runs the Scripps program at Mauna Loa.