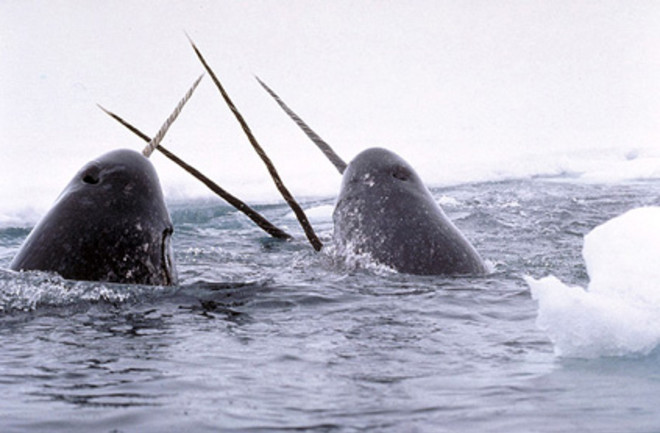 The newest climate researchers are those one-horned wonders of the sea, narwhals. Researchers recruited these marine mammals to gather data about ocean temperatures in Baffin Bay, an icy stretch of the Arctic between northern Canada and Greenland. The project was a collaboration between several climate scientists and marine biologist Kristin Laidre, who declared the experiment a success.

Researchers were eager for assistance, because the difficulty of gathering data in the Arctic winter had led to a hole in the climate data. Says study coauthor and oceanographer Mike Steele:

"We basically knew nothing about winters up in Baffin Bay." ... Traditionally, researchers take seawater temperatures by hanging devices below a survey ship or a helicopter, or by leaving a team on the pack ice over a season to periodically lower a conductivity-temperature-depth (CTD) probe into the water below. But these options are not practical at Baffin Bay in winter, when it is often inaccessible or inhospitable to researchers. [Nature News]

For three winters, the researchers followed 14 narwhals with satellite transmitters, and collected data as the mammals cruised the waters and dove for halibut. The results showed that winter temperatures in the middle of Baffin Bay were about 1.6° Fahrenheit warmer than climate models had predicted. But the climate scientists say they weren't surprised to find yet warming in the Arctic, which is heating up faster than the rest of the planet

, published in the Journal of Geophysical Research, was largely a proof of concept, but now that the researchers feel confident in their cetacean helpers' ability to monitor the seas, they may attempt other experiments. For example, narwhals could be equipped with salinity sensors, Laidre told Nature News

, to provide data on how much fresh water is draining into the ocean from from melting glaciers. Related Content: 80beats: Arctic Report Card: Warm Weather and Melted Ice Are the New Normal

80beats: Whales Have to Shout to Be Heard in Today’s Noisy Oceans