Yesterday, in a Forbes article repurposed at the Chicago Tribune, a Heartland Institute staffer (who was not identified as such by the Tribune) wrote that,

we should thank global warming for making hurricanes less frequent and less severe. Indeed, Hurricane Sandy may well have been much more deadly in the absence of global warming.

This led climatologist Ryan Maue (who was mentioned in the piece) to tweet:

This article is complete bullsh*t & clearly meant to be provocative. I don't want to be associated with it. http://t.co/IGWhENiBIj — Ryan Maue (@RyanMaue) October 29, 2013

As it happens, Maue is someone who regularly calls out overstated--yes, alarmist--claims by climate advocates, and I'd venture to say that climate skeptics think of him as one of their own. So kudos to Maue for calling BS on the extremists in his camp. This kind of straight talk is necessary to keep the flame-throwers on both sides in check. We've seen, for example, NASA climate scientist Gavin Schmidt, push back repeatedly on the silly Arctic methane bomb proponents. After the Heartland staffer's piece in the Chicago Tribune was published, I had some mild fun on twitter:

This prompted indignant climate skeptics to complain that I was painting with a broad brush. One responded:

@Fenbeagle@keithkloor Interesting that #climate change believers never want to explore subtle differences. It's all black or white to them — Foxgoose (@Foxgoose) October 30, 2013 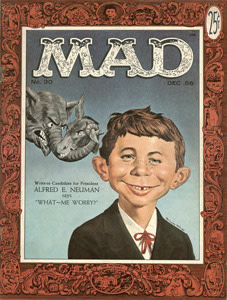 I do not share the sunny "what--me worry?" position on the risks associated with global warming, despite my well-chronicled spats with climate doomers. At the same time, I have little tolerance for the disingenuous game played by many in the climate skeptic sphere, an element of which was recently captured by Robert Wilson at his Energy Collective blog:

Uncertainty. Those skeptical about whether climate change is occurring and that we should do something about it are rather fond of it. Uncertainty of course goes in two directions and the rather one sided interest of many of these so called skeptics betrays their lack of genuine skepticism. We are now being told that we should relax a little because the sensitivity of the atmosphere to the carbon dioxide we are dumping in it might be slightly lower than we previously thought. Even if this is true, to relax would be to ignore the whole equation.

At a fundamental level, climate skeptics who play down the effects and risks associated with global warming are just like climate advocates who hype them. Each side has an agenda and the loudest, high-profile voices of the two sides often use selective evidence and freighted polemics to advance their respective agendas. If reasoned heads continue to call out the disruptive antics of both sides, perhaps that will widen the space for a more nuanced and constructive dialogue.

EnvironmentThe Curve Appears to Be Flattening on CO2 Emissions. What Does That Mean?