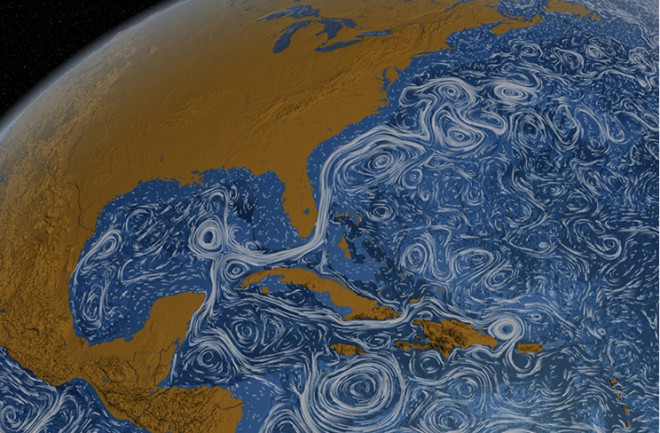 When you picture the rugged coastlines of Norway, tropical heat probably doesn’t come to mind, but it should. Even in the country’s Arctic reaches, the coast is typically free from ice and snow, and the weather is often more Seattle than Anchorage.

How can that be? Residents can thank the Gulf Stream, an ocean conveyor belt that pushes warm water their way from the tropics.

And Northern Europeans aren’t the only ones who should be thankful, either. Much of Europe and the east coast of North America benefit from a massive system of circulating seawater called the Atlantic Meridional Overturning Current, or AMOC. The Gulf Stream is just one small part of that system.

Sunlight might be most intense at Earth’s equator, but ocean circulation pushes that tropical heat toward the poles. When the currents transporting that heat change, it can have major impacts.

Both studies found that melting ice from Greenland has spilled huge quantities of freshwater into the North Atlantic, diluting the dense salinity of North Atlantic currents and weakening the AMOC by 15 percent. However, the results disagree on when the changes started.

For decades, scientists have worried that human-caused global warming could weaken this system and drastically alter weather patterns. It’s an idea best known from the scientifically and cinematically awful 2004 film The Day After Tomorrow.

But nonetheless, scientists say that changes to these Atlantic Ocean conveyor belts have brought some of the most abrupt climate changes in the past. A 2016 studypublished in Science showed how the most recent Ice Age — which not only changed global climate but also reorganized ecosystems — coincided with changes in the AMOC.

That’s troubling considering the research published Wednesday. The two Naturepapers used very different approaches to reach their conclusions. One of the studies, led by Levke Caesar of the Potsdam Institute for Climate Impact Research in Germany, looked at patterns of changing sea surface temperatures. Their results indicated that the AMOC started weakening around the middle of the twentieth century as a result of greenhouse gas emissions.

The other Nature paper, led by David Thornalley of University College London, took a much longer-term look at changes in the AMOC. They studied deep-sea sediment to gather hints at the current’s makeup over time. They found that the AMOC was actually relatively stable from the year 400 AD until about 1850. This period coincides with the so-called Little Ice Age. The authors say that glaciers from the Little Ice Age started melting largely due to natural climate variability at the start of the Industrial Era, and that’s what began feeding freshwater to the North Atlantic.

And while their results may differ on the timing, both groups say human-caused climate change is playing a role. The question going forward is how much will weakened ocean currents alter our current climate and precipitation patterns?