The proportion of major tropical cyclones has risen, and warmer air temperatures along with rising ocean heat have made them nastier. 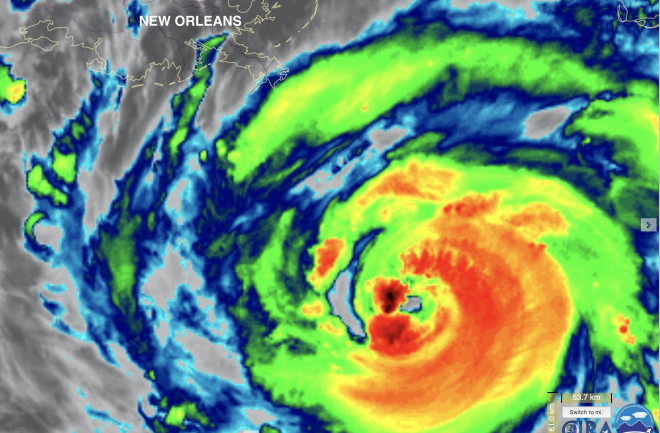 Hurricane Ida bears down on New Orleans near nightfall on Saturday, August 28, 2021, as seen by the GOES-16 weather satellite. (Credit: RAMMB/CIRA/SLIDER)

As I'm writing this on the evening of Saturday, Aug. 28th, Hurricane Ida is bearing down on the Louisiana coast just south of New Orleans. Churning over unusually warm waters, it is expected to strengthen into a monster Category 4 hurricane before making landfall on Sunday.

No matter where it's final landfall will be, the National Hurricane Center says the impact from storm surge, high winds and flooding rainfall will be catastrophic.

According to NOAA a Category 4 hurricane will cause catastrophic damage: "Well-built framed homes can sustain severe damage with loss of most of the roof structure and/or some exterior walls. Most trees will be snapped or uprooted and power poles downed. Fallen trees and power poles will isolate residential areas. Power outages will last weeks to possibly months. Most of the area will be uninhabitable for weeks or months." (Credit: NOAA's National Hurricane Center)

Storms like this prompt many of us to wonder about the influence of human-caused climate change. While it is impossible at this point to gauge the specific impact of warming temperatures on this one particular storm, scientists have learned a lot about how the changing climate has influenced tropical cyclones generally. So here are a few quick take-aways about that from the Intergovernmental Panel on Climate Change report, as well as from recent scientific studies.

But the IPCC report says it's likely that the proportion of major tropical cyclones like Ida has increased globally over the last four decades. (On the Saffir-Simpson Hurricane Wind Scale, "major" means Category 3 to 5 hurricanes.) Moreover, the attribution to human influence has gotten stronger in recent years.

Since 1900, the United States has suffered an increase in normalized damages from hurricanes, according to the IPCC. "Normalized" means that researchers have adjusted for societal changes — especially increased development along coastlines — that have occurred over time.

For example, a study published last year in the Proceedings of the National Academy of Sciences found a positive trend in normalized damage, with the rate of major damage events increasing significantly. The researchers attribute this to "a detectable change in extreme storms due to global warming."

Between 2020 and 2021, the United States suffered 258 weather disasters, with hurricanes causing the most damage, according to NOAA. The total from these storms: $945.9 billion, with an average cost of almost $21.5 billion per storm. Hurricanes also were responsible for the highest number of U.S. deaths from weather disasters: 6,593 people were killed between 1980 and 2020.

Hurricane Katrina — which made landfall 16 years ago on the same date that Ida will come ashore — caused $125 billion in damages. That was an astounding 1 percent of gross domestic product for the entire United States in 2005. (It bears mentioning that while Ida will bring devastating impacts, they are not expected to be as severe as Katrina's.)

Monster storms cause enormous damage not only because of their winds. They also dump unimaginable amounts of water. And research shows that thanks to climate change, they've been getting wetter.

That's happening for a number of reasons. First, a warmer atmosphere can carry more moisture. Research shows that for every one degree Celsius (1.8 degrees Fahrenheit) increase in temperature, the atmosphere can hold 7 percent more moisture. So far, the globe has warmed by about 1.1 degrees C since preindustrial times.

A warmer atmosphere is not the only factor making tropical cyclones wetter. Warming seas is another. In fact, rising temperaures invigorate storms in variety of ways.

Just before the northern summer of 2017, ocean heat content was the highest on record, "supercharging Atlantic hurricanes Harvey, Irma, and Maria," according to a study led by Kevin Trenberth of the National Center for Atmospheric Research. Overall, he and his colleagues concluded that rising ocean heat, plus higher sea surface temperatures, make hurricanes "more intense, bigger, and longer lasting and greatly increases their flooding rains."

If we want to stabilize the climate before far worse impacts occur, it's imperative that we take strong, rapid and sustained action to reduce emissions of greenhouse gases. But even if we do that, "some of the changes already set in motion — such as continued sea level rise — are irreversible over hundreds to thousands of years," the IPCC said in a statement. Moreover, the greenhouse gases we've already pumped into the atmosphere will continue to alter the climate for decades to come.

While storms will continue to get nastier as the world warms further, we can mitigate future damage by changing where and how we build in regions affected by tropical cyclones.