Climate Change Impacts Around the World — In One Graphic 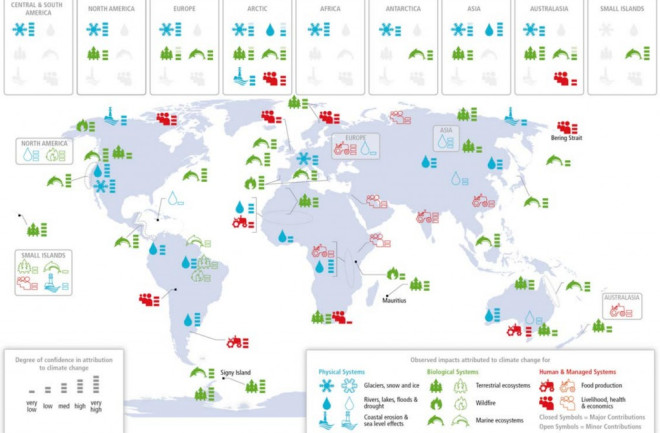 Global climate change impacts. (For a full explanation, see below. Source: IPCC Working Group II Summary for Policymakers.) Here's my take-away on the new report from the Intergovernmental Panel on Climate Change that was released today: Regardless of what you may hear on radio and television shout-fests masquerading as journalism, the best science leads to one simple conclusion: If we want to reduce the risks of significant climate change that would challenge our ability to adapt, we need to act now. Time is running out. According to the IPCC Working Group II report, climate change is already having substantial impacts "on all continents and across the oceans" — and the worst is still to come. The graphic above, which is from the report, shows that no region has been spared. It contains a lot of information (too much, really), so here's a little help in interpreting what you're looking at: The rectangles across the top show broad climate change impacts that have been documented across nine regions. In North America, for example, changes have been observed in glaciers, snow and ice, as well as in ecosystems on land. The bars next to each of the symbols show the degree of confidence that scientists have in attributing the impacts to climate change. Within the land areas on the map, regional-scale impacts where climate change has played a major role are shown by symbols that are colored in. For impacts in which climate change has played a minor role, the symbols are only outlined. Here in the Western United States where I live, we're already familiar with two significant climate change impacts: a decreasing amount of water in spring snowpack, and earlier peak flows in our rivers as warming occurs sooner in the spring than it used too. These impacts pose significant challenges in a region prone to drought to begin with, and which is projected to experience further drying as temperatures warm further. Overall, the litany of changes that have now been observed and attributed to climate change with medium to high confidence is sobering. Among them are these:

And in one of the scarier parts of the report, scientists have concluded that climate change is already having more negative impacts on crop yields than positive ones. Moreover, this will likely get worse as temperatures continue to warm and no adaptation efforts are undertaken, particularly after the year 2050. We often hear it argued that taking steps to lower carbon emissions now would cause more harm than good by reducing economic growth. But the IPCC report cautions that another outcome is likely:

We still have time to reduce the risks. It will require adaptation to the impacts that are already occurring, and are likely to continue because some climate change is already locked in. But this will not be enough to avoid the most significant risks, because there are limits to how much societies can adapt. So taking steps right now to reduce emissions of greenhouse gases is essential.