Some fish, like bluefin tuna, are accumulating higher levels of mercury due to human activities. 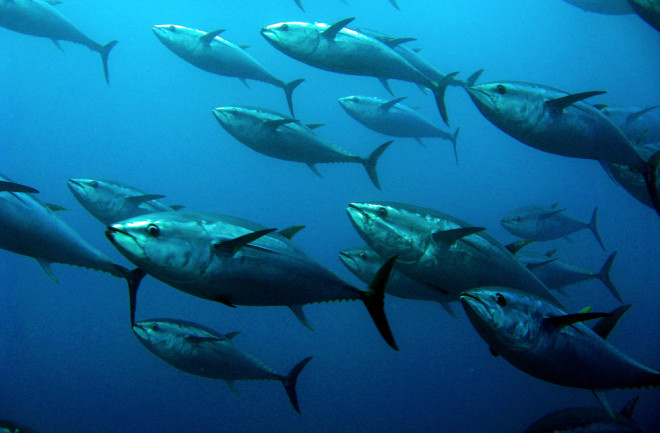 The USDA recommends Americans eat at least two servings of seafood every week. Most of us turn to tuna – canned or otherwise – and cod. Fish tacos and fish and chips? Yes, please!

But now researchers find mercury levels in these popular seafood options are on the rise thanks to overfishing and climate change. Scientists say the findings call for stronger mercury and greenhouse gas emissions regulations.

“Climate change is going to exacerbate human exposure to [mercury] through seafood, so to protect ecosystems and human health, we need to regulate both mercury emissions and greenhouse gases,” Harvard University environmental chemist Elise Sunderland, who led the new research, said in a press release.

Mercury gets into fish by way of the air. Coal combustion, gold mining and cement production as well as forest fires and volcanoes emit mercury into the atmosphere. The oceans absorb this airborne mercury, and microorganisms convert the metal into a form called methylmercury.

The mercury is passed up the oceanic food chain as creatures get eaten, accumulating in larger doses higher up. So, top predators like tuna and cod can end up with significant amounts of it in their bodies. Methylmercury is a potent neurotoxin. Children exposed to it in the womb may develop learning disabilities, cerebral palsy and language difficulties.

In 2017, the first global treaty to reduce anthropogenic mercury emissions – called the Minamata Convention on Mercury – went into effect. But the policy targets did not consider how marine ecosystems are changing due to things like overfishing and warming sea temperatures. Sunderland and colleagues collected 30 years of data on mercury levels in seawater, sediments and marine ecosystems in the Gulf of Maine, an area that commercial fisheries have exploited for more than 200 years. The researchers then used the three decades of data to build a model of mercury accumulation in Atlantic cod and Atlantic bluefin tuna.

For Atlantic bluefin tuna the picture is worse. Because fish don’t regulate their own body temperature, warming seas kick their metabolism into high gear. The extra calories they burn mean they must eat more, and take in more methylmercury. As a result, the researchers found methylmercury concentrations went up by more than 3.5 percent every year between 2012 and 2017 in Atlantic bluefin tuna even though mercury emissions were dropping.

The findings highlight the need for stronger regulations on two fronts: greenhouse gases and mercury emissions, the researchers say. “If we want to continue the trend of reducing methylmercury exposure in the future, we need a two-pronged approach,” Sunderland said. She and colleagues note reducing air pollution from burning coal would also reduce mercury emissions.