What's behind the steady algal takeover of these aquatic treasures? 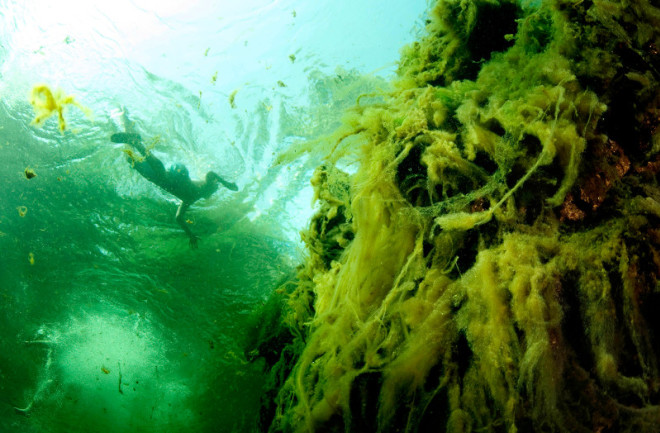 In Troy Springs State Park, algae spread from the edge of Troy Springs to about 30 feet below the surface, clouding the water and smothering native vegetation. | Alan Youngblood/Ocala Star Banner/Landov

Twenty-five years ago, the striking blue waters of Florida’s Peacock Springs were as clear as glass, “like a fantasy,” recalls environmental scientist and cave diver Pete Butt. Snorkeling at the surface, he could see through the water to the limestone bottom and its craggy portals to one of the longest underwater cave systems in the nation.

Divers still converge on Peacock and the other springs that sparkle azure in the forests of northern and central Florida. Yet outbreaks of algae have started to cloud the crystal waters — along with the future of Florida’s collection of more than 1,000 freshwater springs, one of the world’s largest concentrations.

Algae clump on the surface in smelly mats, smother native aquatic vegetation with slime or grow along the bottom in hairy, green strands. “Amorphous goo,” Butt calls it. “Atrocious.”

Scientists have long tied the rise of algae to that of nitrate pollution from fertilizers running off farms and yards, and organic wastes from septic tanks, dairy farms and city wastewater systems. Another suspect: groundwater pumping of the Floridan Aquifer, which provides the majority of drinking water to the state’s booming population and irrigation for most of its crops.

In recent years, though, scientists have begun to see that the causes are not entirely clear, says Matthew Cohen, a hydrologist and ecologist at the University of Florida. For example, some springs with the lowest nitrate levels, such as Alexander Springs in the Ocala National Forest, are matted with some of the worst gunk.

To identify the problems and potential solutions more precisely, Cohen and his students have spent seven years analyzing water-quality data collected through tube-shaped sensors submerged in northern Florida’s rivers and springs. Last year, state environmental protection and agricultural agencies added real-time monitoring on the web, in addition to a project they started in 2013 with farmers, to try and tie specific land-use changes to water quality. For the first time, scientists will have an instant read on how springs respond to all sorts of factors, from fertilizer application to drought or heavy rainfall, says Brian Katz, a geochemist with the Florida Department of Environmental Protection. Clearer science, says Katz, “will eventually lead to clearer springs.”

Analyzing sensor data and field measurements, Cohen and his students have found new clues for the algal abundance, such as declining concentrations of dissolved oxygen and the role of snails in keeping springs clear. One hypothesis is that as groundwater pumping depletes shallower, more oxygen-rich water, the older, oxygen-poor water flows from the springs, perhaps making them inhospitable to snails and other grazers.

A new joint project of Florida’s agriculture and environmental protection agencies combines spring water monitoring with land-management changes in the local watershed. Last spring, Butt, owner of Karst Environmental Services, mounted a special pump at Ginnie Springs, a popular diving and tubing spot outside the city of High Springs. The pump sends water to a nitrate sensor and a device called a sonde — French for “probe” — that measures water temperature, dissolved oxygen levels, pH and dissolved minerals. Then the data can be accessed instantly on the web.

Two state agencies are teaming up with farmers in a 185-square-mile area near Ginnie Springs to study best-management practices, such as reducing groundwater pumping and fertilizer use. Seventy percent of farmers in the area are on board. In the future, Katz says, environmental scientists hope to work with homeowners and local governments to reduce septic-tank and sewage pollution.