City of Brotherly Love Woos Shad With Stairway to Harem 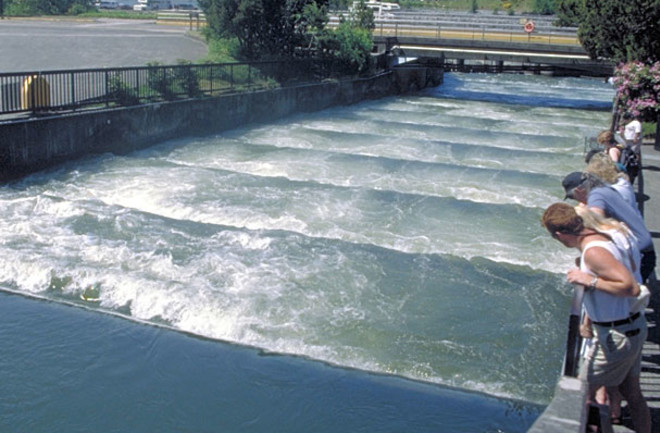 The annual migration of the American shad just got a helping hand from Philadelphia, the city that sees the unsung, bony fish as a symbol of hope for its formerly polluted waterways. The Delaware and the Schuylkill rivers near Philadelphia used to run dense with spawning shad every spring but pollution depleted parts of the waterways of oxygen, creating a barrier to the fish's annual migration. In the decades since the Clean Water Act, the cleanliness of the Delaware and Schuylkill have made a big comeback. Consequently, the Delaware's seen a promising resurgence of shad, as reported in this colorful radio piece (mp3), but the Schuylkill remains vacant because of dams built along the riverway. To restore the shad to its native habitat, Philadelphia's Fish and Boat Commission is building fish ladders, in which fish swim upstream over a series of wooden steps. The six-feet-per-second current is "fast enough to offer resistance but not overpower them. There's a platform inside where the finny creatures can rest." A resting place for "finny creatures"? Someone set these guys up with a Pixar contract! Image: A fish ladder in Bonneville. Credit: Bonneville Power Administration