China's Green Future Is As Hazy As Its Skies

There are signs that China is trying to rein in its smog problem by reducing its coal dependence. That's a win for the planet, right? Not exactly, as Christina Larsen reported several months ago in this Bloomberg story: 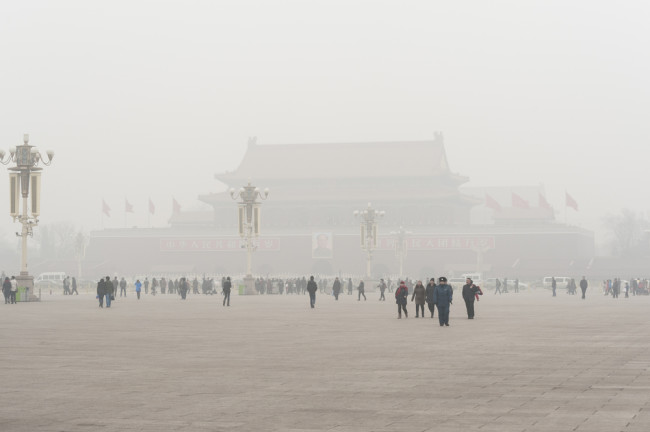 Tiananmen tower enveloped by the heavy fog and haze in Jan 29, 2013.Image by axz700 / Shutterstock

When China makes international news these days, it's often because of its densely polluted air. The public health aspect of this story is usually front and center, while the global warming angle is somewhat muted. Still, there's no getting around the climate implications of China's reliance on coal.

Unfortunately, one scheme to limit coal burning by converting China’s plentiful coal supplies into synthetic natural gas (SNG) presents a host of other ecological worries. To date, China’s government has approved construction of nine large SNG plants in northern and western China, which are projected to generate 37 billion cubic meters of gas each year when completed. At least 30 more proposed plants are awaiting approval. None of these planned plants are located near large Chinese cities, so the emissions generated in producing the gas will not hang directly over metropolises. But that doesn’t mean the coal-to-gas conversion process is clean. According to a new study (PDF) in Nature Climate Change, the entire life cycle of harvesting coal and turning it into gas produces from 36 percent to 82 percent more total greenhouse gas emissions than burning coal directly—depending on whether the gas is used to generate electricity or power vehicles.

But hey, let's not complicate a nice silver lining story, shall we? If China is tackling its coal problem, we should be encouraged that "efforts to improve its air quality will also bring reductions in CO2 emissions," writes Jennifer Duggan, a Shanghai-based journalist and Guardian environment blogger. Why is this a misleading narrative that we should be wary of? As Slate's Joshua Keating wrote earlier this week:

Focusing on smog—a relatively easy-to-solve problem—lets China a bit off the hook for the much larger issue at stake: the country’s CO2 emissions. China overtook the United States as the world’s largest total contributor to climate change in 2007, and it’s quite possible that the country could take steps to reduce the visible smog in its cities while that gap continues to widen. In fact, according to one recent analysis by the World Resources Institute, China’s smog reduction plan could actually increase its emissions by moving to synthetic natural gas converted from coal, which burns cleaner than coal but produces more CO2 overall. Tackling CO2 is going to be a much more difficult problem, and a much harder one to reconcile with the country’s desire to maintain its breakneck pace of economic development.

This coal-to-gas issue is "under-discussed," says Robert Wilson. Indeed, people interested in climate change and the environment seem much more taken with stories about the "greening" of China. The larger picture, as David Biello reports this week in Scientific American, is much hazier, like China's skies and the country's near-term prospects for reducing its greenhouse gas emissions.