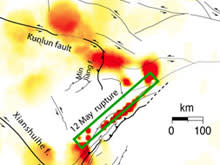 The May earthquake in China's Sichuan province that killed 70,000 people may lead to further destruction. According to a new seismic study, the magnitude 7.9 earthquake in May increased the stress on nearby faults, and therefore heightened the risk of further quakes.

Stress on the nearby Kunlun, Xianshuihe and Min Jiang faults has increased, they say, doubling the risk that one of them will unleash a magnitude 6.0 or 7.0 tremor in the next decade [Discovery News]

. Those three nearby faults are now under more stress

because of a domino-like effect where the movement of one piece of Earth's crust forces another piece to move up, down and away, geophysicists reported. "One great earthquake seems to make the next one more likely, not less," said [study coauthor] Ross Stein of the U.S. Geological Survey. "We tend to think of earthquakes as relieving stress on a fault. That may be true for the one that ruptured, but not for the adjacent faults" [Reuters].

In the study, published Geophysical Research Letters, the scientists estimated that there's a 57 percent to 71 percent chance that the region will experience another earthquake of magnitude 6 or greater within the next decade. While nothing can be done to prevent further seismic upheavals, researchers said that the Chinese people could avert devastating consequences through preparation, and said that

the rebuilding must be as solid as possible. "Earthquakes do not kill people, buildings do," says [study coauthor] Jian Lin [Scientific American].