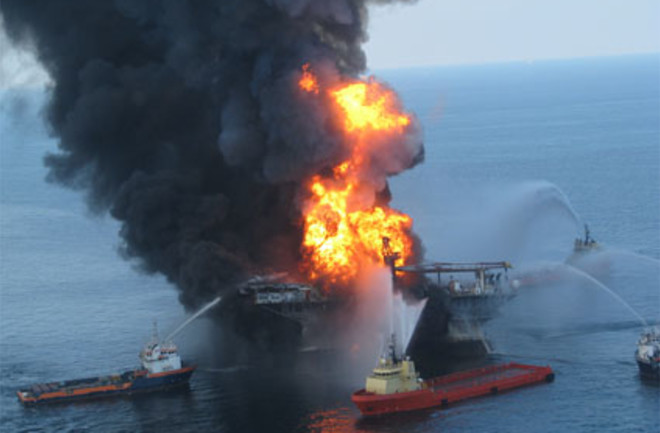 The oil stopped spilling from the Deepwater Horizon wellhead months ago, but the Gulf of Mexico’s environmental saga continues. Researchers have investigated the chemicals used to disperse the oil flow in the first place, and found that these “dispersants” didn’t disperse. The effects of this massive chemistry experiment, however, are still unknown.

“The dispersants got stuck in deep water layers around 3,000 feet [915 meters] and below,” said study leader David Valentine, a microbial geochemist at the University of California, Santa Barbara…. “We were seeing it three months after the well had been capped. We found that all of that dispersant added at depth stayed in the deepwater plumes. Not only did it stay, but it didn’t get rapidly biodegraded as many people had predicted.” [National Geographic]

In total, the response team pumped over 800,000 gallons of dispersants into the oil flow; dispersants break down oil into smaller droplets that can degrade more quickly. But the impact of the dispersants themselves has been up for debate. For the new study, scientists tracked the dispersants by following one of its ingredients: dioctyl sodium sulfosuccinate (DOSS).

Some 640,000 pounds (290,000 kilograms) of DOSS was injected between April and July, a huge number made all the more daunting because the chemical comprises only ten percent of the total dispersant volume, according to the study, published online January 26 in the journal Environmental Science & Technology. [National Geographic]

The dispersants had degraded very little by September, and were still found at ocean depths of around 3,000 feet below. But researchers aren’t sure what to make of this realization that the dispersants lingered longer than expected:

On the one hand, it is positive that the dispersants remained in deep waters and didn’t float up through the water column, where they would have mingled with surface layers, says Elizabeth Kujawinski, a chemical oceanographer at the Woods Hole Oceanographic Institution in Massachusetts, who led the study. “But the bad news is that it stayed there. It didn’t really go away as quickly as maybe they had thought it would.” [Nature]

“These organisms have developed capabilities to live under high pressures, with low oxygen levels, and with no sunlight. It’s a more rigorous and perhaps less changing environment, and all of a sudden a wave of chemical dispersants comes by. What does that mean for the environment? I don’t know. I really don’t. But it concerns me significantly.” [National Geographic]